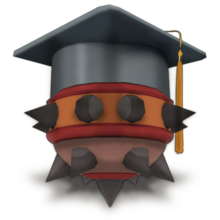 Training Mode is a single-player only game mode that helps players learn the basics of the different classes available in the game. The mode is aimed towards inexperienced players and demonstrates gameplay mechanics and teamwork within a "safe" environment. A series of specific scenarios are given for each class.

At present, training is only available for the Soldier, Demoman, Engineer, and Spy.

Target training is composed of four sections, Soldier, Demoman, Spy, and Engineer training, in that order.

In Soldier training, the player begins in a simple spawn room and is instructed basic movement commands, including W, A, S, D directional movement, crouching, and jumping, to reach a small booth supplied with health and ammo. In the booth, the player is taught how to use the Rocket Launcher, Shotgun, and Shovel at the weapon's optimal ranges upon wooden targets. Upon destroying these targets, a special 'HIT!' particle will appear if it was destroyed correctly; otherwise, the target is indestructible. After practicing upon wooden targets, the player is given live targets that will move around, attempting to fool the player. There are no weapon restrictions in this portion, so it is up to the player how they destroy the targets. After completing Soldier target training, the game proceeds to Dustbowl training.

In Demoman training, the player spawns in said booth and is unable to move from that booth. Similar to Soldier training, the player is first given wooden targets and required to use the appropriate weapon to destroy them. The player is given targets in special situations designed for Demomen; for example, the player is given a target partially hidden behind an object to be destroyed with the Grenade Launcher, five targets which must be destroyed by a single stickybomb detonation, and a target far away for destruction by a charged Stickybomb. Unlike Soldier training, there are no live targets. After completing Demoman training, Spy training is unlocked.

In Spy training, a friendly Spy bot demonstrates cloaking to move past a Sentry Gun. The barriers of the booth are then lowered, and the player is allowed to do the same. The player will then be educated on disguises and sapping, and will have the chance to employ these techniques against a hostile Sentry Gun. Live targets are then provided for training the backstab ability, as well as demonstrating that a person with your name is an enemy Spy. After completing Spy training, Engineer training is unlocked.

After the player completes Soldier target training, they will be able to proceed to a training version of Dustbowl. Once there, basic instructions are provided on the rules of the Control Point game mode. The first round gives the basics of play, the second round introduces the Medic, and the final round introduces the Engineer. After the final point is captured, the player "graduates" Soldier training and is returned to the main menu. After completing Soldier training, Demoman training is unlocked.

Offline Practice allows the player to begin an independent round with no class limitations and against only Bots in three Practice modes: Control Points, King of the Hill, and Payload. Bot difficulty and the amount of total players (recommended to be set at 16-24) can be configured before setup. Currently the maps Dustbowl, Gorge, Viaduct, Badlands, Nucleus, Lakeside, Sawmill, Upward, Thunder Mountain, Hoodoo, Gold Rush, Badwater Basin, and Barnblitz can be played in Offline Practice. Stats and achievements are turned off during the round, though item drops still occur if connected to Steam.