Cauldron is a community-made King of the Hill map released during the Scream Fortress 2018 update. It is a Halloween version of the custom map Bagel.

Cauldron was contributed to the Steam Workshop.

The point on this map features a large cauldron. When the point is captured, the cauldron erupts, changes flame color to the controlling team, and triggers a random effect. The active effect is indicated by an icon displayed on the HUD, which flashes when the effect is about to end. These effects include:

Like several other Halloween maps, Cauldron has its own Underworld. After escaping it, players are granted temporary Invulnerability and will receive full health.

Cauldron is a map with many buildings that lead to the center point. Many areas of the map provide well cover such as the middle cauldron, or the pumpkins placed throughout. 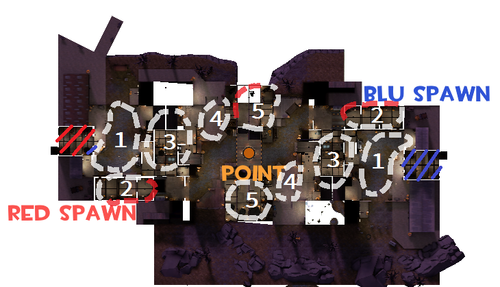