Probed is a community-made King of the Hill map created for and won the 2014 TF2Maps.net Major Mapping Contest #11, "Mercs vs. Aliens". The map was featured in the Invasion Community Update Campaign (October 6, 2015 to November 5, 2015). The map was soon after added to the to the regular quickplay lists.

Storyline: Aliens have nearly completed their invasion of Earth; Humanity's last hope is the lasers that RED and BLU have each hidden near the same farmhouse. Naturally, each team is ordered to prevent the other team from using their competing laser. While the teams contest the point, the Aliens teleport in their own combatants, which then begin firing on the concealed lasers. Meanwhile, other Saucers collect cows. As either team threatens to complete their capture of the point, the Mothership begins to approach. Once it has arrived over the map, the Mothership begins to charge its main weapon as the capping team's laser begins to deploy ....

To win, a team must hold the Capture Point for a total three minutes, while avoiding (or taking advantage) of the Alien UFO that periodically flies over the Point to abduct players.

Probed was contributed to the Steam Workshop.

Probed features an overworld gameplay space. Periodically, varying about every 50 to 70 seconds, a saucer flies over the Control Point, stops, and activates its tractor beam. This beam abducts any players near the Point, pulling them up and inside the spacecraft. The saucer's interior is circular with abductee probing stations in the center. Sets of fur team-colored teleport exit cabenets face opposite each other along the outer wall. Abducted players spawn in front of the enemy's teleporter exits and must fight through the ship to reach their own teleporter exits. Abducted players receive a full heal on arrival and their Speed is increased inside the craft; however, all players begin taking damage due to the alien craft's toxic atmosphere. Players killed within the saucer simply return to their spawn with normal respawn delay. On the other hand, players that succeed on reaching their teleporter exits are instantly placed facing the Point, receiving very brief invulnerability, then overheal and a few seconds of mini-crits.

After the first capture of the Control Point, the Aliens begin to teleport small, seemingly mechanical, "Alien Walkers" onto the map:

This map is a 90 degree symmetrical King of the Hill, with identical team paths from rollout to the central Control Point: 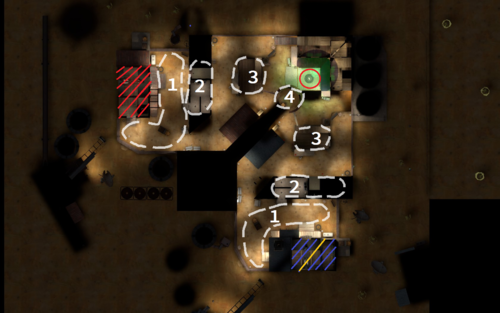 This is the changelog of the map before it was added to the game.
Changelog:
Beta 9