From Team Fortress Wiki
Jump to: navigation, search
Ghost Fort has multiple variations, including King of the Hill.

Ghost Fort is an official King of the Hill map, released as part of the Spectral Halloween Special on October 26, 2012. It is the Halloween version of Lakeside. One key deviation from all other King of the Hill maps is the round length. To win Ghost Fort, a team must have controlled the point for at least seven minutes, versus the usual three.

Similar to Eyeaduct, Mann Manor, and other Halloween maps, Ghost Fort has spawning Soul Gargoyles, pumpkin bombs, and a boss.

At the center of the map is a giant wheel, known as the Wheel of Fate. Whenever the control point is captured, the Wheel of Fate will spin, and one of nine cards will be randomly chosen. Its effect is bestowed upon all players for a short time.

Another feature is a bottomless, "toothed" pit located where the water pool would be in Lakeside. It kills all players who are unfortunate enough to fall in and catapults their ragdoll onto the Control Point.

During certain intervals, Merasmus will appear near the Control Point and roam around the map, teleporting around and attacking players. When Merasmus is on the field, the Bombinomicon will choose two players to turn into a bomb, and tells those players to run the bomb back to Merasmus to stun him. The Control Point cannot be captured until Merasmus leaves or is defeated.

Ghost Fort features a second location, called Skull Island. When Merasmus is killed, he is replaced by a swirling Bombinomicon portal, which players can use to transport to the island. Players can fight their way up to the skull on the top of the hill, where survivors are greeted by a chatty Bombinomicon, congratulating them on defeating Merasmus and inviting them to poke around and take his skull hat (see Bombinomicon's responses). The Skull Island Topper floats in a cage that eventually opens. Players can enter the opened cage and obtain the achievement A Lovely Vacation Spot, and the Skull Island Topper, if they haven't already received it. The opened cage also teleports players back into the main field, with invulnerability, 200% overheal, a speed boost, and a crit boost for a limited time. After the cage has been opened for a time, the cage closes and demonic laughter is heard before an explosion kills all players still on Skull Island.

Note: ​This map was originally released with Haunted Halloween Gifts spawning on the map during Halloween Events; this feature was replaced with Soul Gargoyles in Scream Fortress 2015. 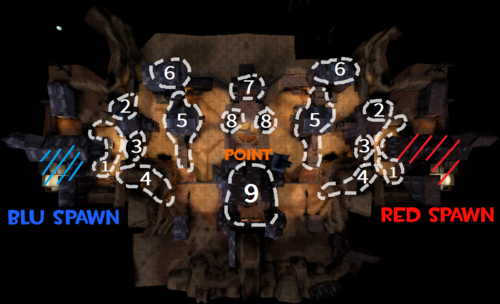 Since Merasmus booby-trapped the Control Point, a "Wheel of Fate" is spun whenever the Control Point is captured. Its effect will be bestowed upon all players of both teams and will be displayed on each player's HUD next to their health, as well as announced by Merasmus. The effect will expire after a short period of time or when a rapid changeover of the Control Point occurs and causes the new effect to replace it. The list of possible effects are as follows:

These cards also appear on the Wheel of Fate while it is spinning, but they do not have any effects and cannot be picked. 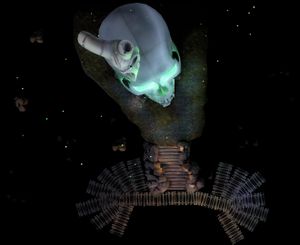 Overview of the Skull Island part of map 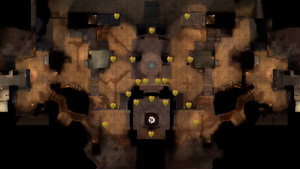