From Team Fortress Wiki
Jump to: navigation, search
This article is for content released in the update. For the patch itself, see October 26, 2012 Patch. 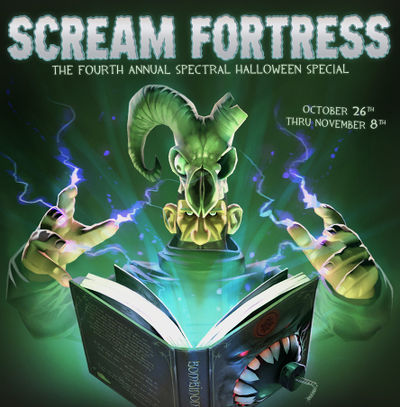 The Fourth Annual Spectral Halloween Special was the 2012 Halloween event, which included the new maps Ghost Town (a haunting of MVM Coal Town) and Ghost Fort (a haunted adaption of Lakeside that introduced Merasmus as a boss), new items, and two new Necromannchievements. The event also introduced Voodoo-Cursed Souls. Players that logged on during the event also received a Halloween Goodie Cauldron.

On October 23, 2012, the head of the Spy portrait on the TF2 Official Blog was changed to resemble a skull. Clicking on the skull led to a hidden page, with a newspaper page titled "The Teufort Reader" reporting the theft of Voodoo-Cursed Items (later release into the game). The bottom of the newspaper is ripped, showing two cards with odd symbols.

The following day, October 24, a comic titled Doom-Mates was released. The comic details Merasmus' return home from his weekend at WizardCon, and his growing resentment towards the Soldier.

The next day, October 25, a page was posted that announced the event would begin the following day, October 26, and gave a link to the update page with all the info. It announced a new Mann vs. Machine mission called "Wave 666", where instead of fighting robots, the players fight zombies, and a new Halloween King of the Hill match (on koth_lakeside_event[1]) with Merasmus (with the Bombinomicon) as the boss. It added two new achievements and introduced Halloween Spells, which players can cast on other items in their backpack to give their items new effects, from shifting paint colors to flaming footsteps. Additionally, the Gift Drop system was changed; during the last two years, gifts spawned publicly and could be claimed by whoever arrived there first, while that year, players would receive private gift spawns that they can grab at their leisure.

Merasmus is a non-playable character wizard boss, who attacks both RED and BLU teams until he is slain. He has several attacks, including using the Bombinomicon to rain bombs around the Control Point. His health range varies from 50000 to around 100000, depending on the number of players in the server. Merasmus does not appear until ten or more players are present (not including spectators or bots).