From Team Fortress Wiki
Jump to: navigation, search
Badlands has multiple variations, including Arena and King of the Hill.

Badlands is a remake of the Classic CTF Badlands from Team Fortress Classic, and was released in the February 14, 2008 Patch. Much of the map has been changed and the map type has been changed from Capture the Flag to Control Point. The map consists of a base for each team, an open second point for each team located on the top of a hill, and a center point on the bridge.

The middle capture point is located on the bridge that separates the map in half.

The final control points are located inside the complexes at either end of the map. 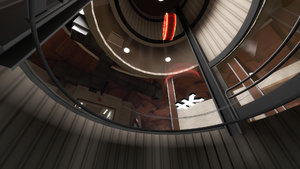 The yen on red's final point