From Team Fortress Wiki
Jump to: navigation, search
This article is for Competitive play, based on the Standard competitive format. For the generic article on this topic, see: Badlands (Control Point).
Competitive articles are currently in development. If you have any questions, just ask.

Badlands is a remake of the classic CTF_Badlands from Team Fortress Classic. Much of the map has been changed and the map type has been changed from capture the flag to control point. The map consists of a base for each team, an open second point for each team located on the top of a hill, and a center point on the bridge.

The objective of Badlands is to control all five capture points. Each team starts with their second and final control points locked, leaving only the middle point available.

All place names are given from the perspective of defense as their primary name (in terms of left and right), except obviously for the middle control point. 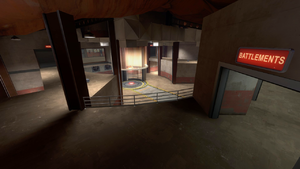 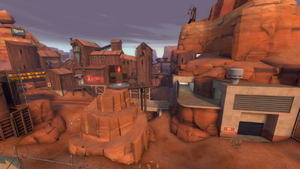 Many people refer to this control point as "Spire" because of the points location. 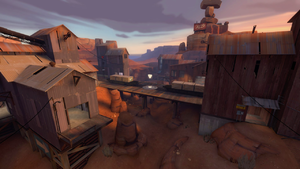 Because of the symmetrical style of Badlands, each team share a similar landmark/location on their respective sides of the middle point. A popular method to counteract this is to add the prefix "our" or "their", e.g. "their Choke". Some players may also refer the middle point as "Mid" or even "Bridge" because of, like the 2nd/4th point, the landmark it is located on.

Because of the maps popularity in competitive play, a number of strategies have been employed in this map. The more effective ones have become standard for teams wishing to either employ the tactic as it is or build upon them so they adapt better for their team mates.

Positioning is very important for teams to understand as they form the defensive parts of their play.

Video of the Demoman Rollout:

Video of the Soldier Rollout:

The usual route for the Demoman will see him Sticky jump out of spawn, placing a bomb on the wall around where the red/blue meets the grey, he should strafe and aim for main. His second jump, arguably one of the more difficult jumps of this roll out, involves the Demoman jumping from the bottom of the stairs and gliding over the stairs, avoiding the top lip of the doorway, onto the top floor of his team's base — preferably landing near the pills. The third jump through the vent, another difficult jump, involves a sticky placed on the closest of the corrugated sheets to the left, preferably near the bottom, aiming to land on the wooden bridge. Demomen can either pick to jump from wooden bridge onto the balcony, although a majority of Demomen will take the safer route and walk through house and pick up the health kit inside. Demomen that play at a division one level can consistently reach the health pack with 9:45 on the clock using this roll out.

After leaving spawn the Soldier rocket jumps off the wall directly to his right where he can either drop down through main or go through the right upper lobby entrance. If the Soldier is going through main, he should try and emulate the Demoman and jump over the stairs although they should aim to reach the floor just before the door so the Medic can heal them. If the Soldier is going through upper lobby, he should go through the second doorway and rocket jump off the wall to his right and aim to get onto the area where the pills should spawn, by now the Demoman should have picked them up. The final jump of this roll out sees the Soldier dropped down from the vent and perform a standard rocket jump onto the wooden bridge.

If the Escape Plan is allowed, only one Soldier needs to do the roll-out whereas the other Soldier can fire two rockets to take himself below 80 health, and then whip out the Escape Plan. There is no need to risk killing yourself during roll-out just to get the fastest speed, after all, you only have to wait for the Medic if you're too quick. You should have enough time during freezetime to damage yourself and reload both of the rockets.

An alternate rollout is instead of jumping onto the small spire, he ignores the spire and the bridge and instead jump straight ahead. He goes down and takes a left around the house. The benefit of this rollout is the Scout goes under Capture Point 3's bridge the fastest, and you minimal damage from the enemy Demoman.