From Team Fortress Wiki
Jump to: navigation, search
This article is about the cloak ability. For other uses, see Cloak (disambiguation).

Cloak, or cloaking, is an inherent ability of the Spy that is influenced by the Invisibility Watch, Cloak and Dagger and Dead Ringer. Cloaking allows the Spy to become invisible for short periods of time, depending on the watch he is wearing, allowing him to move unnoticed through enemy lines or make a quick escape when attacked. While cloaked, the Spy is unable to attack for the duration of the Cloak. 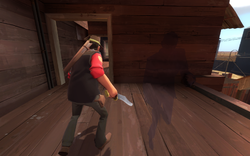 A cloaked BLU Spy bumping into a RED Sniper.

While cloaking disables attacking, the player may still use the Disguise Kit and see their active weapon. Disguising while cloaked will remove the team tinted smoke particle effect, allowing seamless disguise changing. Be aware that this is only true if the Spy is completely invisible when the Disguise Kit is used. While cloaked, the Spy is completely invisible to all enemies. The Spy's teammates will be able to see him as a semi-transparent silhouette tinted in their team color. This will allow players to determine if an area is being surveyed by a friendly Spy and to structure future movements around him. While cloaked, the Spy cannot do most objectives. This includes capturing a point, defending a point from capture, capturing a Payload, defending a Payload from capture, and carrying the intelligence.

Harming or bumping into a cloaked Spy will cause the team-colored silhouette to become visible to all players regardless of team. While under the Dead Ringer's damage reduction effect, being injured or bumped into does not produce a silhouette.

Cloaked Spies stop making most sounds, such as automatic voice responses (e.g., screams when being shot). Voice commands can be used uninhibited, and certain responses also occur anyway. Natural special effects such as cosmetic particles are also hidden. When a cloaked Spy is hit with weapons that produce visual effects, such as Jarate, Milk, Bleeding, and Fire, the effects will be applied normally, rendering the Cloak ineffective. Similarly, emerging from water will cause the Spy to drip water droplets even when cloaked, and falling from a certain height will also produce a blood particle effect and an audible crack. Cloak will also prevent the Medic's secondary weapons from being able to heal the Spy, but the Crusader's Crossbow can still heal a cloaked Spy.

Upon decloaking, the Spy will make a unique noise and briefly appear in a team-colored silhouette, regardless of disguise, before becoming visible. Because of this, care should be taken to decloak out of sight and hearing range of enemies. The Spy also must be fully decloaked before he may use any of his weapons or change disguises. In order to recloak, the Spy must have at least 10% cloak.[1]

Each watch will display its Cloak meter on the weapon model viewed by the player. The meter is also visible in the HUD.

While Cloaked, even when standing in a valid backstab position, the Spy will not raise his Knife.

The Spy cannot activate Cloak within 0.5 seconds after attempting to backstab; however, the Spy can immediately use Cloak after using a Sapper or firing his primary weapon.

Cloaking using the Dead Ringer is instantaneous, the other watches require approximately one second. Decloaking requires approximately two seconds for all watches.

The nature and strategy for cloaking depends on the type of watch the Spy uses in battle. Additionally, the enemy team may alter their behavior in order to protect themselves against a certain type of watch. A Spy should therefore be proficient in all Cloak types to be able to adapt to any opposing force.

With the Invis Watch, the default watch in the Spy loadout, along with the Enthusiast's Timepiece and Quackenbirdt, both promotional variations, a Spy can Cloak for a maximum of 9 seconds, during which they can move through enemy lines, across Sentry Gun paths, or away from attackers while remaining completely invisible. Picking up ammo in the form of boxes will replenish the Cloak at the default rate. Map layout and location of various ammo points, therefore, are important to players who wish to remain cloaked for a longer period of time. Dispensers on either team can also fill the Cloak meter even when the Spy is cloaked. Be advised, however, that using an enemy Dispenser will require the correct disguise, and that the Spy may be discovered if bumped into by Engineers collecting their metal or any other class whom are healing themselves at the Dispenser.

Uncloaking will produce a quiet 'whooshing' sound that can be heard by other players in the immediate vicinity. Experienced Spies should therefore uncloak in an isolated location, preferably with an appropriate disguise, in order to avoid enemies who may start searching the area upon hearing the noise.

While cloaked, the Spy moves at his normal movement rate regardless of what class he is disguised as.

The direct counter of the Cloak is the Pyro. If set on fire while cloaked, the Spy will be rendered visible and will burn with a team-colored ambiance. Spies should avoid Pyros when cloaked; if bumped into, a Pyro may begin to Spycheck the vicinity, in which case it can prove difficult to escape unharmed.

The Cloak and Dagger watch serves as an alternative to the default watch. Its Cloak will last for 6.2 seconds when the Spy is running, and has penalties for replenishing cloak outside recharging: it cannot be replenished by ammo boxes while invisible, and when not invisible, ammo boxes replenish 35% less cloak compared to the default Invisibility Watch. The Cloak recharges automatically when the Spy stands still or remains decloaked.

Due to the nature of the recharge, a Cloak and Dagger Spy will mostly conduct his espionage standing still. Objects in the map such as boxes or corners will therefore provide strategic points from which to crouch and relay enemy movement to the team through chat or microphone. Additionally, these areas provide points from which players can backstab slow moving classes or sap buildings. Once the Spy performs these quick assassinations, they can return to their vantage point for the next unsuspecting victim. This can effectively cut off high traffic areas, as the enemy will become wary of using the route. Alternatively, they may send in a Pyro to flush out the Spy; should this happen, the player may want to seek a different place to hide.

Once the Cloak meter is drained, the Spy will not put the watch away and decloak; instead the Spy will remain cloaked with a clear visible outline, similar to being bumped into by an enemy. Coming to a halt will resume full invisibility, but any enemy players nearby can see the outline and attack. 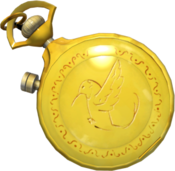 The Dead Ringer allows the Spy to feign his own death.
Main article: Dead Ringer

The Dead Ringer watch is unique in terms of cloaking. The watch does not produce a Cloak when it is flipped open, but rather held up in the player's view in a ready position. Instead, when the watch is out as the Spy is dealt damage, either from enemy fire or environmental damage, the Spy will drop a fake corpse, send a fake death to the 'kill list', gain a temporary speed boost, and immediately become cloaked for 7 seconds. During the first 3 seconds of the Cloak, any damage received by the player will be reduced by up to 75% (potentially averting death from normally fatal attacks such as headshots or critical attacks), and will not shimmer if attacked or bumped into by enemies. After this period, the Spy will be under standard cloak conditions (20% damage reduction, reduced timer on debuffs).

The corpse dropped is dependent on the disguise the player was using at the time. Dropping a friendly disguise as a corpse, therefore, may allow the Spy to move into enemy territory without arousing suspicion. Furthermore, activating the Dead Ringer upon being attacked with a weak attack (such as a single Pistol shot) may arouse suspicion. Players should therefore wait a couple of seconds if under continuous fire before cloaking to provide a more convincing fake death. This should not apply to competent Snipers, stickybomb traps, or forms of critical attacks.

Spies with the Dead Ringer can't collect ammo and use Dispensers to replenish the Cloak, so the distance a Spy can travel is reduced to the cloak time. Spies must be aware of their surrounding when they decloak, and not be caught in the open due to the shortened time. Additionally, ammo pickups give no additional cloak time, so a Spy must wait longer for a cloak to be ready for use. Attempting to rush to the backlines will not be a reliable strategy with the Dead Ringer, even with its temporary speed boost.

The main disadvantage with using the watch is the loud and distinctive decloaking sound. Players should utilize cover or keep a distance from the enemy before uncloaking. Should the Dead Ringer be heard, enemies may begin searching the area for the Spy. Since the Cloak takes a long time to recharge without a nearby ammo source, uncloaking far from enemies is a priority if the player wishes to remain alive.

After the first 3 seconds of cloak, the Dead Ringer can be inflicted with afterburn. Attentive Pyros may continue to chase the Spy once lit, making escape more difficult. Leading the Pyro into a friendly Sentry Gun or experienced teammate may prove a successful way to escape. If the Spy is being Pre-Jarated or Mad Milk-ed before the feign, he would be visible even when the feign is triggered.

The length of the initial Cloak by the Dead Ringer can be valuable to teammates as a way of defending them from incoming projectiles, or blocking enemies. With a 75% reduction in damage, the player can prevent an ÜberCharged couple from advancing, or absorbing damage for a teammate of vital importance.

Aside from providing normal Cloak espionage, the Dead Ringer can serve as a paranoia tool. Making an obvious fake death can lead to enemies spending more time spychecking, possibly even causing Medics to deploy their ÜberCharge early in anticipation of being backstabbed. This can allow teammates an opportunity to advance on an objective under the Spy's command, or wait for the enemy ÜberCharge to end before activating their own.