In Team Fortress 2, it is difficult to combat the enemy team with everybody working alone, and essentially impossible just by yourself. Working with the other classes on your team is an important aspect of success. This article is designed to assist you and your team with team strategy. For a guide on improving your own game, see Strategy. For map-specific strategies, see the individual pages for each map.

Due to the absence of a mini-map, and Team Fortress being a class oriented game, communication and cooperation is always a key element to achieve victory. Coordination between the team players and the right balance of classes will always lead the team towards victory. Even regardless of skill levels, communication is the most important ability to learn. Either through the use of teamspeak or the in-game voice chat, a team with good communication and synchronization can defeat skilled players that lack teamwork. Effective team communication and coordination is especially desired in the more competitive venues of the game.

Voice commands and text messages are very useful ways to communicate, but, since many in game sounds and the location of the character may affect if teammate is able to hear the voice command and some players may not pay attention to the text chat, a microphone will always be a more reliable way to communicate with your team. For example, vital information such as the location and disguise of enemy Spies, the place of enemy Sentry nests and Stickybomb traps and the timing of attacks and ÜberCharges (by the enemy or by the team) simply cannot be communicated as easily without the use of voice chat.

However, it is worth bearing in mind that some servers use the AllTalk feature, which allows every player in the server to listen to everyone, including the enemy team. In such circumstances, it may be best to use the team text chat for more vital information, since sharing this by voice chat may cause the enemy team to be ready to counter your attacks. AllTalk is generally enabled on some public servers, in which the game is played more for the social interaction of every player, no matter the team, rather than playing with a competitive mind.

Team Fortress 2 is a class-based team game in which players on a team have to cooperate and coordinate to achieve victory. The nine different classes have their own strengths and weaknesses and their own unique styles of play, based around maximizing their strengths and minimizing their weaknesses. However, it is impossible for any one player no matter how skilled to completely compensate for the weaknesses of the class they are currently playing. One player may be less skilled than the other, but he could still win in an encounter in which his current class has the upper hand (such as a less-skilled Pyro beating a skilled Spy). This makes the choice of which class to play very important, and the player will be rewarded for learning more about different classes, and at the same time it makes cooperation equally important. One could think of it as a very complex game of rock, paper, scissors.

A mistake many new players commit is to view Team Fortress 2 outside of the team context, focusing instead on the class(es) they prefer to play and thinking of strategy only in terms of a series of one-on-one match-ups. However, most combat situations in Team Fortress 2 will be between groups of players involving a variety of classes. Therefore to be successful, one must think and work as a team, rather than as a solitary unit. This includes being aware of what classes currently make up your team as well as the classes that make up the opposing team, this is known as team composition. It is often possible to gain an advantage by having several players that play as classes who counter the classes of the enemy team (an example being, using Demoman and Medic combos, to counter a team that has many Engineers, thus too many Sentry Guns). However, it is important to not over-compensate and have too many people change classes (e.g. a team has a problem with Spies, so lots of players switch to Pyro, this could lead to vulnerabilities in the team due to the classes they lost from switching). It is a better idea to check the scoreboard periodically to keep an eye on your team's current classes and recommend adjustments accordingly, but you must also be willing to change your class if the situation calls for it. For an average 12v12 pub game, this composition should work on most cases: 2 Scouts, 2 Soldiers, 2 Pyros, 2 Demomen, 2 Heavies, 2 Engineers, 2 Medics, 2 Snipers, 2 Spies. The remaining four should be divided amongst Soldier, Demoman, Heavy and Medic, with no more than 3 or (for extreme turtle breaking only) 4 Medics.

It is important to be good at a few classes rather than just one. Know your class' strengths and weaknesses, so that you can make good calls about when you should switch to another class. It is also important to know the different roles each class can play, e.g. asking your team's only Engineer to switch to Medic so your team can make a push for the Enemy's intelligence would not be a good idea, as it is equally important to both capture and defend intelligence in a ctf map. In general, instead of saying "can somebody be Medic," it would be a better idea for you yourself to swap to Medic and fulfill that need as long as you are not already playing a vital role.

On the other hand, trying to become an expert at every single class is also not a very good idea, or at the very least, not until you've had at least a year or so of playing the game under your belt. Not only is this very difficult to do, but also playing a class you're poorly skilled at during a game may actually do more to hinder your team's efforts than help them. It's more helpful to your team to be a specialist at 2 or 3 classes, and be "pretty good" at another 1, 2, or even 3 others on the side, than it is to be sufficient at everything, but a master of nothing.

Try to find what kind of combat strategy appeals to your playstyle, and improve your skills with those classes or those close to them. Not everyone has what it takes to can play Spy proficiently or the steady hand to play Sniper for example. Some players find they are better suited in the back, supporting their team from the rear or in the background, some find they are better at picking off enemies from a distance, while others find they are more comfortable up close and personal. Find what you're great with and find ways and strategies to improve your play with them in order to master them. The most practice though should going onto improving your skills with classes your moderately good, but not great with. If you find you absolutely cannot grasp a certain class, it might be a better idea to simply ignore it for the time being and work on improving the "good" and "moderate" skill level classes.

The heart of Team Fortress 2's gameplay are the nine different classes and how they interact with both friend and foe. Even if you play only one or two of them on a regular basis, it is still enormously helpful to learn about the role of each class in the overall context of a game. Each class has unique attributes that determine their strengths and weakness: health, movement speed, weaponry, and other innate abilities such as health regeneration or the ability to Double Jump. This section categorizes the different classes and is meant to draw attention to how the different classes can work together to become more powerful in groups than they would be functioning alone. NOTE: this categorization is different from the "official" class roles of Offense, Defense, and Support defined by Valve, and it is meant to draw attention to strategic and play-style similarities as opposed to an arbitrary "theme." 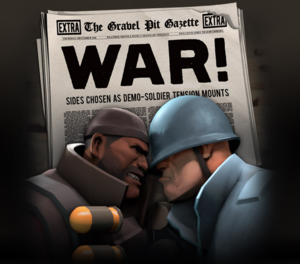 The Soldier and the Demoman, the artillery of the team. 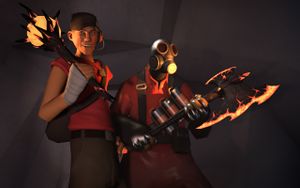 The Scout and the Pyro, two of the Close Combat classes of the team. 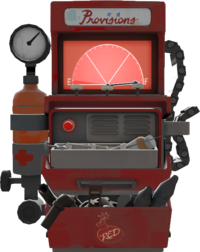 A level 2 Dispenser built by an Engineer. 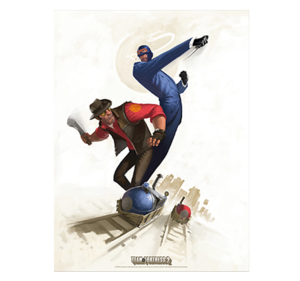 The assassins: the Spy and the Sniper.

These are strategies in Team Fortress 2 that most players should learn and understand to help their team achieve victory. Using these in combat will allow your team to possibly have an advantage in a match.

Find alternate routes and use them to get behind the enemy or Capture points, but keep in mind how much extra time this will take. Do not take the same flanking route too often to avoid becoming predictable, as the enemy will quickly learn from their mistakes and anticipate your strategy.

Communicate with your Medic buddy. Try not to waste your ÜberCharge, but remember that it is better to spend your charge and survive than to die with a charge ready. Have a plan for what you will do when ÜberCharged.

The only problem with this strategy is that the Heavies are completely helpless at long range. Enemy Snipers can easily pick off Heavies due to their large hitboxes and slow movement speed.

Level 3 Sentry Guns have one weakness - their range. No matter how many are deployed in a sentry fort, all of them will be wiped out if you let them come into contact with Soldiers and Snipers. Use what is given to you to your advantage when defending - you cannot stress this enough, as 730 metal does not come out of nowhere, other than the Resupply Cabinet.