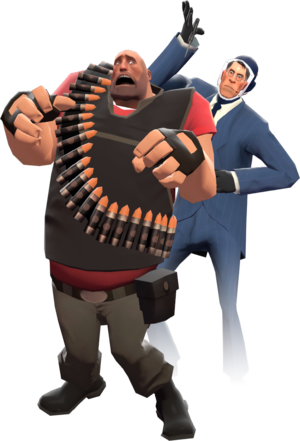 The Spy is a class dedicated to trickery and deceit. Specializing in espionage and sabotage, he can backstab, cloak, and disguise. He can also sap an Engineer's buildings, causing them to malfunction. Enemies that are Spy checking should be avoided, and to escape suspicion, a little bit of acting on your part can go a long way. With some skill and luck, Spies can even fool veteran players, and professional Spies can easily wreak major havoc on the enemy team.

Friendly disguises can prove handy in a variety of situations. Friendly disguises are useful at the beginning of rounds, especially during setup time, because they will avoid giving away that you are a Spy, while making the enemy team prepared for a class that isn't necessarily in use. If you're having trouble getting behind enemy lines, a friendly disguise can be used to scare enemies (for example, a friendly Pyro disguise in close quarters) or to feign a death more convincingly. If an ally needs help, you can use a friendly disguise, such as a Heavy, to draw enemy fire. Your hit box is not the same as your disguise class, so you can draw Sniper fire with some disguises with a reduced risk of taking a headshot; however, a full-charged bodyshot will still take you down if you aren't overhealed or using the Dead Ringer to feign death. Friendly disguises, particularly Medic and Sniper, are good for baiting, as many enemies will not expect a friendly disguise. Use this bait to prepare for a stab, shoot the target with your secondary weapon, or lead enemies into teammates or Sentry Guns. These tricks can be used more safely and repeatedly with the Dead Ringer, as you can fake friendly deaths.

in a safe area, then move in for the kill.

Most, if not all, tactics concerning Engineers will only work if the Engineer is not surrounded by allies. Use these tactics wisely. 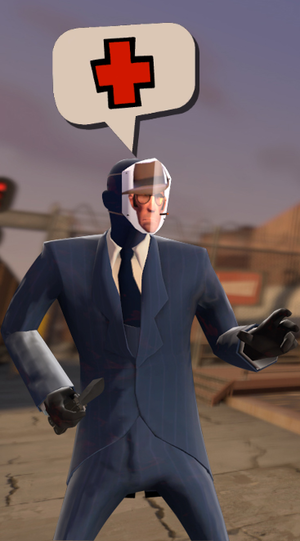 Approaching your victim for a backstab is difficult without getting caught. It is common for an enemy player to randomly Spy check hiding places and teammates. You can expect the enemy team to Spy check more often if they are alerted to the presence of a Spy.

The easiest targets to approach are distracted players who are busy with another task. Common targets are Engineers that are building/upgrading and Snipers who are looking through their Sniper Rifle.

There are a few things to keep in mind before going in for the killing blow:

A Spy's weapons and gadgets can drastically change how a Spy has to approach his target. Keep these tips in mind when choosing your loadout:

The Spy generally works on his own instead of working with his team, picking off high priority targets in the backlines. However, a bit of knowledge on your available options when it may be beneficial to team up with allies could make the difference between a skillful win, or humiliating loss.

Generally speaking, the Scout and Spy hardly often work together due to their completely opposite playstyles. Despite this, there is still some chemistry to be found in a Spy-Scout pair up.

Soldiers are a very attention-grabbing class and will make it easier for friendly Spies to go unnoticed, simply by existing near the enemy team.

Few classes are better at distracting large numbers of enemies than Pyros are. The amount of chaos a Pyro can descend upon an enemy team means it will make you less likely to be found out, even after a stab.

Despite their differing playstyles, Demomen and Spies have a surprising amount of chemistry, and are often found working together on both offense and defense.

Heavies act as the full-frontal assault class and as a spearhead for teammates to rally around. Since they are almost always targeted first and can be easily killed by enemy Spies or Snipers, it can be of similar importance to protect the Heavy as you would your Medic.

While a Spy may not be directly working with an Engineer, his actions on the battlefield indirectly help an Engie immensely. Additionally an Engineer who is properly maintaining his buildings will also help out a Spy on the prowl.

Protecting your allied Medics should be prioritized at all times. To this end, strategically eliminating high priority targets will make your Medics' job easier and keep him from dying.

Snipers and Spies fulfil the same role of priority elimination and paranoia. Working with your allied Sniper is crucial in not only controlling enemy movements, but getting the drop on the enemy team before they realize what hit them.

Stacking Spies is generally not recommended, as one Spy getting noticed may prompt the enemy team to use tactics that will get both found out.

A crucial part of playing Spy effectively is understanding which classes are the most important to backstab and which ones are better to ignore in any given situation. Generally, if a lone enemy player has their back turned, or are oblivious to their surroundings, it is a good idea to backstab them. However, in cases where the enemy is paired up, or grouped together in areas such as around the cart or a Sentry Nest where your death is almost assured after your first stab, there are some guidelines that should be kept in mind before attempting to approach.

In order of priority, the classes you should be backstabbing first are:

These classes are situational, and can be prioritized in any order at the player's discretion:

These are the classes you should NOT attempt to backstab, unless in very specific situations: