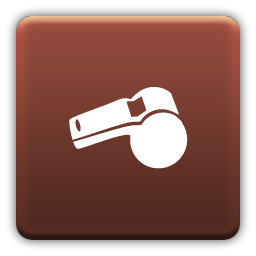 Coaching is a game feature added in the March 18, 2011 Patch (Beta) for Team Fortress 2 Beta and in the April 14, 2011 Patch for everyone to use. It allows players to be able to call on others for help with certain objectives, or to provide advice and feedback on a person's abilities and gameplay.

A player can volunteer to become a "coach" through the use of the megaphone icon in the main menu. "Students" may place requests for a coach through the whistle icon. After a matching process and authorization by both players, the coach is automatically connected to the student's server.

In order to be a coach, a player must click on the megaphone button in the main menu entitled 'Be a Coach'. They must then confirm that they want to be added to the list of coaches. Once that is done, the game will attempt to register the player as a coach and will inform the player of whether or not the attempt has been successful. A player successfully registered as a coach can continue to play as normal, but will receive an alert if they are matched with a student. The alert will offer the player the choice of whether or not to accept the invitation to be a coach. If the invitation is accepted, the game will remove the player from the list of coaches and attempt to connect him or her to the student's server.

In order to receive coaching (that is, in order to be a student), a player must select the 'Request Coaching' whistle icon from the main menu while in a game. The player will be asked to confirm that they would like coaching and then asked to choose a coach. A player can select a coach by name from their friends list, or choose to be assigned any available coach. The player can then continue to play as normal and they will be informed when a coach accepts the invitation to coach them. Multiple coach requests are sometimes required due to the current bugs in the coaching system whereby coaches are often invited to games that they cannot join.

What the student sees once issued the attack command by the coach.

The coach is given access to various commands to be used in educating the student. Note that all of the resulting markers and sounds are only visible and audible to both the coach and the student.

Should the attack or defend order be assigned to a moving target, the arrow and HUD will track them in 3D space, thus ensuring both coach and student are aware of the target at all times.

Students receive two additional commands which allow them to rate (F7) or remove (F8) the coach. 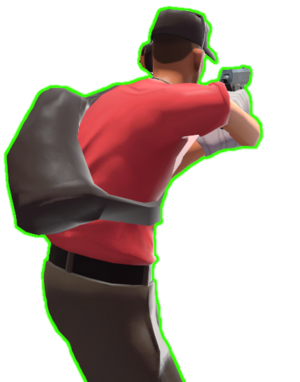 The outline the "coach" sees around a healthy "student".

The viewpoint of the coach functions similarly to that of the Spectator. They have the choice of a first-person, third-person, or free camera perspective. During free camera, the student is outlined to the coach with a glow similar to the Payload carts and Intelligence. The color of the glow serves as a visual indicator of the student's health; green indicates the student is healthy, whereas red indicates that they are near death. The movement of the free camera is restricted to within 30 arbitrary distance units of the student. The distance is displayed on the coach's HUD. Whenever the student respawns, the coach's view is reset to the third-person camera.

The view for the student is the same as for normal play except that the student can see the beacons mentioned above, and there is a small overlay in the top-right of the screen. The name and avatar of the coach appears in the overlay.