From Team Fortress Wiki
Jump to: navigation, search
This article is for content released in the update. For the patch itself, see April 14, 2011 Patch. 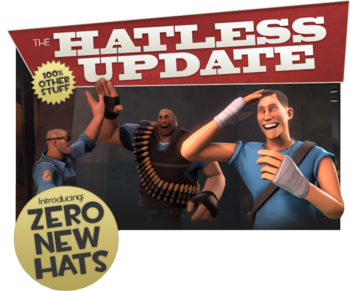 The Hatless Update was a major content update for Team Fortress 2 and was released in the April 14, 2011 Patch.

The update included changes originally tested in the Team Fortress 2 Beta such as the coaching and voting systems, Training Modes for the Demoman, Engineer, and Spy, Badlands' King of the Hill Mode, and several item tweaks.

Other additions were the introduction of styles, dynamic model loading, and the association between servers and Steam IDs. Bots had their AI improved and duels were given the option of being class-specific. The painting and voice chat systems were also improved. A 'Sort by Rarity' option was added to the Backpack for sorting items.

The coaching system allows players to be able to call on others for help with certain objectives, or to provide advice and feedback on a person's abilities and gameplay. A player can volunteer to become a "coach" through use of the megaphone icon in the main menu. "Students" may place requests for a coach through the whistle icon. After a matching process and authorization by both players, the coach is automatically connected to the student's server.

Team Fortress 2's UI was rebuilt to support a basic voting system. This included voting for the next map to be played, the kicking of a player, and the scrambling of the teams.

The Demoman, Engineer, and Spy now have their own training lessons. A new achievement called Ready for Duty was added for users who complete all training courses.

Styles are different versions of appearance or painting of an item which can be chosen by the player to be in effect instead of the regular version.

The following item tweaks were introduced with the Hatless Update, but were subsequently reverted in the April 15, 2011 Patch.