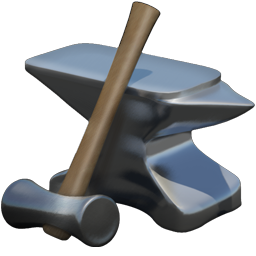 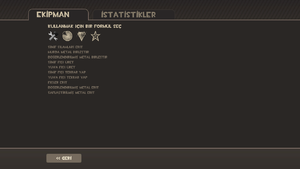 The following list shows what is accepted in the Fabricate Set Headgear blueprint and their results:

In contrast with the weapon slots presented in-game, the crafting system classifies some weapons in different slots. For example, the Spy's Revolver is classified as a secondary weapon despite how in-game, it is equipped in the first item slot. Below is a list of all the usable weapons and slots that the crafting system uses. Note that the table does not include the Stock weapons for the classes, such as the Scattergun, as these are not usable in crafting. However, if one has a stock weapon that has been renamed or described, it can be used to craft into scrap.

Some items which are obtained by special means, such as promotions and weapons bought from the Mann Co. Store, cannot be crafted either as an ingredient or as a result.

Crafting numbers are a cosmetic value attached to any crafted weapon or cosmetic item introduced during the 5 Mayıs 2011 Yaması, as well as most items added in any later update. This number represents the order that a given item was crafted in; for example, a "Brain Bucket #1" would be the very first Brain Bucket to have ever been crafted. While the craft number goes into the thousands on third-party backpack viewers, #100 is the maximum value displayed in-game. For example, a "Brain Bucket #101" would only appear in-game as "Brain Bucket."