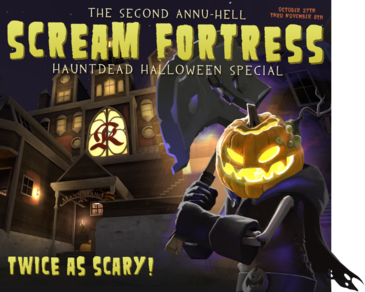 This article is for content released in the update. For the patch itself, see October 27, 2010 Patch.

This event included the release of the two new Art Pass Contest-winning maps, new cosmetic items, and new Ghostchievements as well as the reactivation of the 2009 Haunted Halloween Special's Scarechievements. The event also inaugurated Haunted Halloween Gift pickups, which was a means of distributing free Halloween-restricted costumes for 5 years.

Although the Scream Fortress page on the TF2 Official Website stated that the event would only last until November 8, 2010, the Haunted Halloween Gift stopped spawning at Mann Manor, and Halloween-only cosmetics ceased to be wearable at around November 8 at 8am GMT. However, Halloween-restricted items like the Spine-Chilling Skull, Voodoo Juju, and Noise Maker continued to be available at the Mann Co. Store throughout the day.

The Horseless Headless Horsemann is a non-playable character boss, spawning on Mann Manor, who attacks both RED and BLU teams until he is slain. The Horsemann, who is depicted as the undead apparition of Silas Mann, has a health range from 3000 to 9400, depending on the number of players in the server.