From Team Fortress Wiki
Jump to: navigation, search
This article is for content released in the update. For the patch itself, see September 30, 2010 Patch. 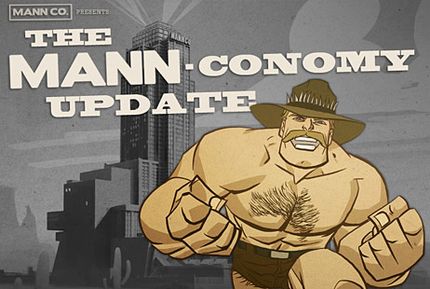 The Mann-Conomy Update was a major content patch for Team Fortress 2, and was released on September 30, 2010 Patch. In total, the update added 65 new items including community-contributed content from the Polycount Pack contest, new Cosmetics, weapons, Unusual effects, mini-games, tools, crates, and packs of cosmetics and weapons. The update also introduced the Mann Co. Store, Steam Wallet, and microtransaction system as well as item trading.

These items are given to those who purchase Left 4 Dead 2.

As the update was introduced, all of the items which were previously obtained became "Vintage Items". Their name is now rendered blue, and the "Vintage" prefix was added to their name. According to Valve, "some items that used to be rare will become more common when they are available for purchase. (...) This way, those older rare items remain rare (in fact, they're even rarer, because they're limited editions now). "

Some exceptions were promotional items, including but not limited to the Cheater's Lament, Alien Swarm Parasite, Lumbricus Lid, Mildly Disturbing Halloween Mask, Bill's Hat, Ghastly Gibus, Earbuds and Big Kill, as well as all the medals and craft materials.

As of now, it is possible to trade with players on a player's friends list, with other players in their current server, and through either player's Steam Community ID.

The Mann Co. Store is an in-game micro-transaction service. The store allows players to purchase in-game items such as Cosmetic items, weapons, and action items using money stored in their Steam Wallet. Creators of community-contributed items receive a percentage of sales for anything they've created.