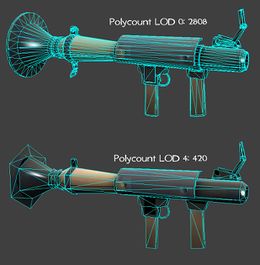 In discussions about model optimization, Level of Detail, or LOD, is often brought up. This article shows the effect of LOD on the polygon count in models. The charts show which models have received optimization updates in the form of LOD and which models are still unoptimized.

To reduce the number of polygons that need to be rendered in a scene, the Source Engine will render alternate lower-quality models as the distance between the model and camera increase. LOD models are not created dynamically by the engine; instead, all of the levels of lower-quality models must be included in the game files for LOD to be enabled.