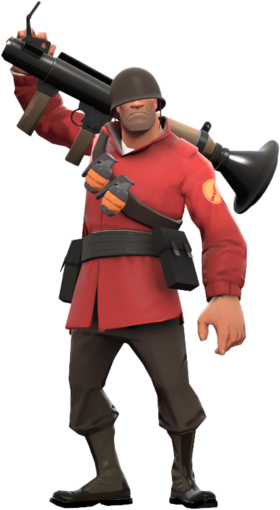 As the most well-rounded combat class, the Soldier is easy to pick up and play but difficult to master. The Soldier is durable, strong at both close and medium range, is well-equipped to deal with Sentry Guns, and can use rocket jumps to move quickly and reach places other classes can't. However, he has the second-slowest on-foot movement speed of all the classes, and his Rocket Launcher can be both difficult to aim at long range (due to the rockets' slow projectile speed) and dangerous to use at close range (due to the risk of self-damage). Regardless, the Soldier is a strong pick on offense and defense alike, and experienced players can assault or defend strategic locations with ruthless efficiency.

Rocket jumping is essential to the Soldier, as it lets him get around maps quickly.

The Direct Hit is an unlockable primary weapon for the Soldier. It is intended for sharpshooting; rockets fired from the Direct Hit travel 80% faster than default rockets and deal 25% more damage, but have a 70% reduced splash damage radius. It also deals mini-crits against enemies sent skyward by knockback.

The Black Box is a craftable primary weapon for the Soldier. On hit, each rocket can restore up to 20 HP per attack (but cannot overheal you) depending on how much damage is done. However, the Black Box can only load three rockets at a time, trading staying power for survivability. You can tank damage and keep fighting for longer than usual, but the smaller clip size prevents you from sustaining fire for as long as with your other Rocket Launchers.

The Rocket Jumper is a craftable primary weapon for the Soldier. It deals no damage to the player and carries 60 extra ammo instead of 20, allowing rocket jumping for no self-damage. However, it also deals no damage to enemies, and prevents the player from carrying the Intelligence when equipped.

The Liberty Launcher is a craftable primary weapon for the Soldier. It has a 25% larger clip size, giving you 5 rockets per clip, and fires rockets that travel 40% faster than standard rockets. Rocket jumping with this weapon also deals 25% less self-damage, letting you rocket jump with a lower health penalty. As a downside, each rocket deals 25% less damage.

The Beggar's Bazooka is a craftable primary weapon for the Soldier. Though fundamentally similar to other launchers, it is kept unloaded; upon holding fire, the player can load up to three rockets that fire in rapid succession when released. However, it comes with the danger of misfiring if the player holds fire past three rockets, which causes damage to the player and destroys one of the three already-loaded rockets. Additionally, the Beggar's Bazooka comes with a 3-degree spread limit, each rocket has a 20% smaller blast radius, and you cannot refill ammo with Dispensers while the weapon is active.

The Air Strike is a craftable primary weapon for the Soldier. Upon a rocket jump and until the player lands, this weapon's firing speed increases by 65%, and each rocket produces a white trail. Additionally, simply killing an enemy with this weapon increases its clip size by one; the weapon's clip size starts at four and increases to a maximum of eight after 4 kills. The Air Strike's projectiles deal 15% less self-damage to the Soldier, but also deal 15% less damage to enemies. They also have a 10% smaller blast radius, which is further reduced by 20% while rocket jumping (28% when compared to stock).

The Reserve Shooter is a craftable secondary weapon for the Soldier. It reduces the player's switch and holster time by 20% and 15% respectively, and will mini-crit targets that are sent into the air by explosion-based knockback. However, it can only load up to four Shotgun shells at a time.

The Righteous Bison is a craftable secondary weapon for the Soldier. Instead of a spray of hitscan bullets, this weapon fires a highly-accurate and unreflectable laser beam that pierces enemies and buildings. The Righteous Bison reloads very fast and holds unlimited reserve ammunition, while the laser projectile itself is slow-moving, almost comparable to rocket projectiles. Friendly Snipers wielding the Huntsman will also have their arrows set alight if your projectile crosses their weapon's path. As a downside, the Righteous Bison does 80% less damage to buildings, and has a clip size of four rather than six.

The Gunboats are a craftable secondary weapon for the Soldier. When equipped, the Gunboats will reduce the damage you take from rocket jumps by a further 60%, resulting in roughly 15 self-inflicted damage for each rocket jump.

The Mantreads are a craftable secondary weapon for the Soldier. While worn, you receive only a quarter of the usual knockback from enemy explosions, can inflict stomping damage through long falls when falling on enemies, which also negates falling damage to you, and have 200% more air control when rocket jumping.

The Buff Banner is an unlockable secondary weapon for the Soldier. By dealing damage to enemies, you build up your Rage meter, which takes 600 damage to fill. Upon activating it, the Soldier and nearby teammates will gain a mini-crit boost for ten seconds, so long as they are in proximity to the Soldier with the buff active.

The Concheror is a craftable secondary weapon for the Soldier. It builds Rage by inflicting damage like the Buff Banner, and takes 480 damage to fill. When activated, it provides a speed boost and causes 35% of all damage dealt to enemies to return as healing to whoever inflicted the damage. Passively, the player restores up to 4 health every second when the weapon is equipped, which drops if they have been damaged recently. Health regen can drop down to 1 per second, effectively negating any afterburn or bleed resistance.

The Panic Attack is a craftable secondary weapon for the Soldier. It is a Shotgun that has a 50% faster deploy speed, has 50% more pellets, fires its pellets in a fixed pattern, deals 30% less damage, and has a bullet spread that increases the longer it is fired. Compared to the Shotgun, it's a great backup tool for close-range combat, but falters at longer ranges due to its reduced damage and wider bullet spread.

The Shovel is a reasonable choice when conserving ammo.

The Equalizer is an unlockable melee weapon for the Soldier. It deals more damage as the player's health decreases; however, Medics will heal you 90% less while you have the weapon out (through Medi Gun variants, the Crusader's Crossbow, or Amputator's Medicating Melody).

The Escape Plan is a craftable melee weapon for the Soldier. It is the speed boost version of the Equalizer; as health decreases, speed increases, but while it is in use and for one second after switching weapons, the user is marked for death and will take mini-crit damage. The boost is only active when the weapon is held, and the mark for death appears even if the player quick-switches and puts the weapon away without using it. Additionally, the player will gain 90% less healing from Medics while the Escape Plan is out.

The Pain Train is a craftable melee weapon for the Soldier and Demoman. While equipped, it doubles the rate at which the player captures control points, but also grants 10% increased vulnerability to bullet-based weapons (including all hitscan weapons). These effects are passive, and do not require the Pain Train to be active.

The Half-Zatoichi is a craftable melee weapon for the Soldier. Similar to the Demoman's swords, it has increased melee range but a slower draw and holster speed. It restores half of the player's maximum health upon killing an enemy, which can grant overheal. However, the Half-Zatoichi cannot deal random crits, and is Honorbound: if the player puts the weapon away before it gains a kill, it will deal 50 self-damage, and if the player has less than 50 health, they will be unable to sheath it. The Half-Zatoichi can be sheathed without harm if a kill has been made, and will also instantly kill any enemy brandishing another Half-Zatoichi in a single swing.

The Disciplinary Action is a craftable melee weapon for the Soldier. It has a 70% increased melee range, the longest range of any melee weapon in the game, and upon hitting a teammate, it gives both the player and the teammate a speed boost for 3.6 and 2 seconds, respectively. More than one teammate can be boosted at once. However, the Disciplinary Action does 25% less damage compared to the Shovel.

Grenade is the third longest-range taunt in the game and deals damage in a splash radius. When this taunt is performed, the Soldier will in all probability die; any enemy players and buildings that are close by will also die or be destroyed, respectively.

Scouts are the most fragile offensive class and their weapons are designed for one-on-one battles. This sometimes gives them trouble fighting against tougher classes or groups, so be sure to offer assistance. Your crowd-controlling ability can make his job of cleaning up much easier, while he has his own array of tools to make you more effective.

Two Soldiers mean double the projectiles and, oftentimes, double the crowd control. Depending on the loadout of each Soldier, it is possible to cover the weaknesses of either player through positioning or weapon choice.

Due to the Soldier and Pyro's strengths at close range, enemies who face both of you at once will seldom make it out alive. However, Pyros lack the mobility to get in and out of combat like you do; with your support, a Pyro can enter the fray more easily and safely.

Demomen and Soldiers fill up the role of "artillery" in Team Fortress 2; both are durable, deal strong splash damage that can affect multiple opponents, and will generally fill the battlefield with projectiles. A combination of both classes is no laughing matter, and can often decimate groups or keep enemies from moving forwards.

The Heavy and Soldier are among the strongest direct combat classes in the game. Although a Heavy may take some time to get to the front lines, a Soldier-Heavy pair can easily kill any enemies that stand in their path, using their hitscan and explosive weapons as the situation warrants to counter any attacks.

Due to their lower health, firepower and mobility, Engineers won't be running straight into combat like you do. However, their ability to create Buildings make them imperative for any team; your job will usually be to protect Engineers and their buildings in order to maximize your team's defensive capabilities.

You are among the Medic's highest priority targets for healing, next to the Heavy and Demoman. Unsurprisingly, you will team up often with a Medic in order to wreck havoc on unprepared teams.

Snipers and Soldiers have conflicting playstyles; you work well at short to medium range, while a Sniper excels by staying back and attacking at a distance. While you may not be able to work hand in hand, you can make a Sniper's job much easier in various ways.

You are an attention-grabbing class who can scatter enemy teams using your powerful rockets, while a Spy relies on attracting minimal attention to himself, while supporting your team by eliminating single key targets. As with the Sniper, you won't be fighting often together, but your combined efforts can accomplish several notable feats.