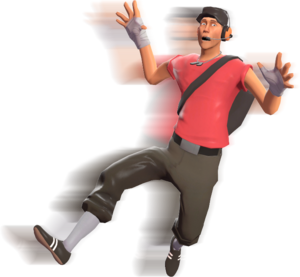 Knockback is the movement of a player caused by an outside source.

When taking damage from any source, a player will experience an amount of knockback that generally scales directly with the power behind the attack. For example, a point-blank Scattergun blast will push its recipient farther back than an uncharged Sniper Rifle shot. While most weapons inflict minor knockback at best, there are quite a few exceptions that inflict significant knockback and can have a dramatic effect on the battlefield. Significant sources of knockback will instantly interrupt any animations the victim is in, including taunts and consumption of a lunchbox item. Items that can reduce or prevent the effects of knockback include the Mantreads, the Quick-Fix's ÜberCharge, and the Cozy Camper. The only items that increase the effects of knockback are the Shortstop and the Thermal Thruster. The Heavy takes 50% less knockback from damage sources except for Sentry Gun bullets.[1]

The explosive projectiles fired by weapons such as the Rocket Launcher and Stickybomb Launcher are among the most powerful sources of knockback and can send victims flying through the air. Crouching or being airborne reduces air drag, greatly increasing the degree of knockback experienced. Classes that utilize explosives will often take advantage of this mechanic to propel themselves great distances.

Damage over time / Self damage

Damage received from an adirectional source or a weapon that hurts the user will push the recipient upward. The degree of knockback experienced scales with the damage taken and is usually minor, but can be significant enough to access previously unreachable areas.