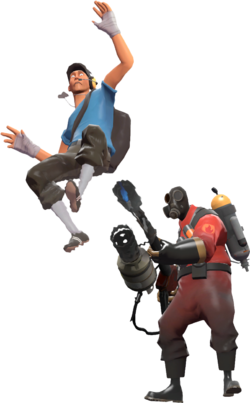 The Pyro is a class whose combat strategies revolve around close-range combat. The Pyro's Flamethrower can dish out huge amounts of damage at close range, while the resultant afterburn can cause panic among enemies by slowly sapping their health. In conjunction with the Shotgun, the Pyro is effective for eliminating unaware targets at point blank, though comparatively weaker at ranged combat even while equipping weapons such as the Flare Gun. Despite being categorized as an Offensive class, the Pyro is not restricted in support tools: the Flamethrower's compression blast can also alter the flow of gameplay, being able to push back enemies (even ÜberCharged enemies, except for those under Quick-Fix ÜberCharge), deflect or move projectiles, and extinguish teammates on fire. A good Pyro will constantly switch between both offensive and support play, protecting the team from projectiles and fire, while working to find opportunities to enter enemy territory and set them ablaze.

Your compression blast is an extremely useful tool for protecting teammates and positioning targets. Use it well.

The Backburner is an unlockable primary weapon for the Pyro. It deals guaranteed critical hits when attacking a target from behind, but cannot deal random critical hits and uses 150% more ammo when performing a compression blast (50 ammo instead of 20).

The Detonator is a craftable secondary weapon for the Pyro. While it functions like the Flare Gun, alternate fire will detonate any flares in mid-flight, causing a small explosion that ignites any enemies within its radius. Its flares can harm the Pyro, but allows them to Detonator jump a slight distance into the air. However, the Detonator deals 25% less damage to enemies, and only mini-crits burning players (both from the flare and explosion). The player additionally takes 50% more self-damage from this weapon, making multiple Detonator jumps heavily damaging.

The Reserve Shooter is a craftable secondary weapon for the Pyro. It deals mini-crits to any opponent sent airborne by knockback, such as from the Thermal Thruster, explosions, and the Grappling Hook. It also deploys 20% faster. However, the Reserve Shooter has a 34% smaller clip size, holding only four shots.

The Scorch Shot is a craftable secondary weapon for the Pyro. It fires special flares that explode upon contact with a surface, regardless of whether it hits a player, the ground, or other objects. Initial direct hits on an enemy or teammate will cause the flare to bounce before it drifts to the ground and explodes; the flare itself and its explosion will set opponents on fire. The world explosion can be used to flare jump, which grants comparatively lower height but lower self-damage compared to the Detonator. Additionally, any enemy hit directly by a flare will be sent backwards by knockback, while the flare will mini-crit (direct hits and explosion alike) and deal increased knockback against burning targets. As a downside, the Scorch Shot deals 35% less damage, and grants 35% less self-knockback, making flare jumps less effective.

The Panic Attack is a craftable secondary weapon for the Pyro. It is a Shotgun that has a 50% faster deploy speed, has 50% more pellets, fires its pellets in a fixed pattern, deals 30% less damage, and has a bullet spread that increases with each consecutive shot.

The Thermal Thruster is a contract reward secondary weapon for the Pyro. The Thermal Thruster functions as a mobility tool, which stores two jetpack charges. Each charge is regained after 15 seconds and charges can be used underwater. On use, the Pyro performs an initial liftoff, sending them a short distance upwards. Shortly after, the Pyro will take off with a quick blast that launches them in the direction they are aiming; the beginning of the jump also extinguishes any nearby teammates and pushes nearby enemies away. Upon landing, the Pyro will knock nearby enemies back; should the Pyro fall from a high enough altitude and land on an enemy (when the player makes a cartoony "falling" noise), the resultant stomp will deal 3x standard falling damage, much like the Mantreads. The knockback dealt on enemies is determined by how high the Pyro jumps from when the Thermal Thruster is activated. If a jetpack charge is not used, the Pyro will not cause stomp damage even if landing on an opponent.

The Gas Passer is a contract reward secondary weapon for the Pyro. This weapon has a "Gas" meter that fills up slowly over time and with damage dealt. Unlike other rechargeable weapons, the meter starts out empty when the Pyro first spawns or equips the item, will not fill or be affected by touching a Resupply locker, and charge is retained upon death and respawning. The meter takes 60 seconds and/or 750 damage dealt to fill, after which the Gas Passer can be pulled out. The Gas Passer acts somewhat like the Jarate or Mad Milk, but upon being thrown, it leaves a team-colored gas cloud on the floor that lingers for several seconds. If the gas can bursts in midair, the gas cloud will slowly descend during its lifetime until is reaches the floor. The Gas Passer can also be used to extinguish burning teammates. Any enemy that comes in contact with the gas cloud will be doused with gasoline for 10 seconds (5 if being healed by a Medic or Dispenser). Doused enemies, including other Pyros, will suffer from Afterburn if they take any form of damage, including bullets and projectiles. The afterburn effect lasts for 10 seconds. If the victim lingers in the gas cloud, the afterburn duration will not reset.

The Axtinguisher is an unlockable melee weapon for the Pyro. It deals guaranteed mini-crits on enemies that are on fire (extinguishing them in the process), and its damage increases depending on how much afterburn time the enemy has left — instantly dealing all the afterburn damage the target would have taken as mini-crits. However, this comes with several downsides: the Axtinguisher has a 35% increased holster speed (preventing the Pyro from deploying the Flamethrower for another combo), deals 33% less damage, and cannot roll for random critical hits.

The Homewrecker is a craftable melee weapon for the Pyro. It does double damage against Engineer Buildings and has the ability to destroy Sappers placed by enemy Spies in one hit, but inflicts 25% less damage against non-building targets.

The Powerjack is a craftable melee weapon for the Pyro. It grants the user 15% faster movement speed while active, and killing an enemy with this weapon restores 25 HP, which grants Overheal should the player be at maximum health. However, the user will take 20% more damage from all sources while the Powerjack is held.

The Back Scratcher is a craftable melee weapon for the Pyro. It does 25% more base damage than the Fire Axe, and passively raises healing gained from health packs by 50%. However, it reduces the player's healing rate from Medics, Dispensers, and the Payload cart by 75%.

The Sharpened Volcano Fragment is a promotional and craftable melee weapon for the Pyro. It ignites enemies on hit, but deals 20% less base damage than the Fire Axe.

The Third Degree is a craftable melee weapon for the Pyro. It deals standard Fire Axe damage, but will transfer all damage done to all targets being healed by a Medic beam or the Medicating Melody taunt.

The Neon Annihilator is a promotional melee weapon for the Pyro. It deals guaranteed critical hits on wet opponents (one covered in water, Jarate, or Mad Milk), and any player who has been in contact with water in the past 5 seconds. It can also remove Sappers from friendly buildings in two hits. As a drawback, this weapon deals 20% less damage against players and does not roll for random critical hits.

The Hot Hand is a contract reward melee weapon for the Pyro. Unlike other melee weapons, attacking will trigger two consecutive melee swings. The weapon deals less damage than the Fire Axe, which is split between the two slaps (28 x 2, for a total of 56 damage). Upon hitting an enemy with this weapon, the player gains a very short speed boost (similar to the Disciplinary Action, but with a much shorter duration) and the hit is announced in the kill feed, similar to the Holy Mackerel and the Unarmed Combat. Kills with this weapon are shown as "SLAP KILL!" in the killfeed. Like the aforementioned weapons, this message does not show if the victim is a Spy using an active Dead Ringer, allowing you to detect if a Spy has faked his death.

The Pyro and Scout are both excellent ambushing classes. A coordinated ambush can result in killing practically any enemy without too much effort.

Paired together, Pyros and Soldiers are the most mobile-yet-bulky pairs in the entire game. While both classes have their own effective ranges, the Pyro's supportive tools and the Soldier's overall firepower makes the duo excellent for carrying out a small push.

While Pyros are often confined to close range, there is usually nothing scarier than seeing a pair of Pyros causing plenty of havoc. Whether you and your partner have similar loadouts or not, there is a larger dynamic in your firepower being doubled; enemies will usually have a hard time dealing with you.

The Pyro and Demoman are opposites in the way their classes produce damage; the Pyro focuses on gradual and close-range damage, while the Demoman focuses on sudden, mid-range damage. However, working together allows you to fill in several team roles or perform more efficiently.

While not the most dynamic pairing out there, a Heavy benefits immensely from having a friendly Pyro defending them.

As an Engineer is constantly dealing with enemy projectiles and Spies, you are unsurprisingly the most useful pairing. While you may spend most of your time defensively, the plentiful benefits of working hand-in-hand more than make up for it.

You are a Medic's fastest patient and the only pocket capable of directly defending your healer from damage with compression blasts. While not truly the strongest offensive combo, the duo are formidable at close-quarters fighting and picking.

Given the Pyro and Sniper's range differences, you will not often interact with one. However, there is still a bit of chemistry to be had with a friendly Sniper.

A Spy and Pyro duo seem counterproductive, as they are only usually seen combating each other when on opposite teams. It's rare for the two on the same team to be found doing something together, but possible nonetheless.