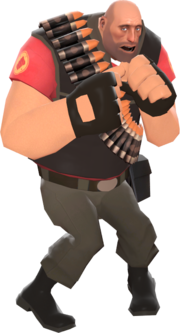 The Heavy is the sturdiest but least maneuverable class. He easily soaks up damage and still poses a threat thanks to his Minigun, which can mow down anyone who dares face him head-on. The Heavy will almost always be found at the frontlines, often supported by a Medic. Because his direct combat is so powerful, taking him down will require smart play or additional firepower from teammates. The Heavy's weakness lies in his size and lack of speed, which makes him an easy target for sneak attacks or long-range weapons. Additionally, he has less diverse loadout options than other classes, limiting his unpredictability; any weapon that provides utility usually comes with heavy combat drawbacks.