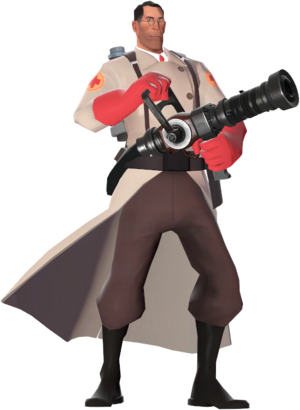 The Medic's primary role is to keep their teammates alive. The Medi Gun is not only able to heal injured teammates, but also overheal them above their usual maximum health. In addition, healing will slowly build the ÜberCharge meter, which can be spent to grant powerful buffs to teammates. Depending on the particular type of Medi Gun equipped, the Medic is able to provide his patient and himself with invulnerability, guaranteed critical hits, boosted healing and knockback immunity, or resistance to one of three damage types, all of which can often completely turn the tide of a battle.

Unfortunately, the Medic is poor at combat, having low damage output and a low maximum health. Because of this, the Medic relies on their team for protection; the team keeps the Medic alive, and in turn the Medic keeps the team alive.

The most important skill for a Medic to learn is how to stay alive. Dying as a Medic deprives your team of their primary source of health, greatly weakening the team as a whole. Not to mention that Medics lose all of their ÜberCharge upon death, requiring yet another 40 seconds to be spent on building up that Über again. This is especially problematic if the enemy Medic has an ÜberCharge of their own. Due to all of this, you are often enemy team's number one target. So take note of the following tips.

While there certainly are many things to be aware of while playing Medic, it is also important to not be a coward. Yes, your life is precious and dying can make a difference between a win or a loss. But this does not mean that you should sit at the back of the map, too scared to fight on the frontlines. A good Medic heals as many people as possible, prioritizing those in the biggest need. So its clear that you will have to take certain risks in order to fulfill your duty successfully. You just need to realize when that risk outweighs the reward and vice versa. So keep your eyes open, recognize the flow of the game and make sound decisions. That is all which you need to stay alive.

As a Medic, you provide the delicacy of being able to heal your team at any time, at any place and for an infinite duration. And while this ability certainly is powerful, it still has its limitations. For one, you can only heal one person at a time, usually at a fixed rate of 24 hp/s. This downside becomes especially apparent in situations where there are multiple injured teammates asking for your help at the same time, requiring you to prioritize the ones in the biggest need.

Healing can be a stressful job. Ensuring that your entire team is alive and well, while also keeping yourself from dying requires at least some mental fortitude. Factor in the additional frustration of constantly being let down by your team despite doing your best; and there is real potential for a Salt factory to develop. This is not good for a Medic, who needs to keep a calm head so that he can make sound decisions. If you find yourself being ever increasingly annoyed while playing Medic, it might be wise to take a small break from him. The point of TF2 is having fun, not raging at teammates.

ÜberCharge is the Medic's most powerful ability, and is one of the most horrifying tide-turners to pull from your sleeve. A well-timed ÜberCharge can singlehandedly wipe an entire group of enemies, prevent them from passing through a choke point and keep them from taking control of an area. However, ÜberCharge can only be used once your ÜberCharge meter is full (which in most cases takes around 40 seconds); therefore it is very valuable to you and your team.

Über tracking is the act of trying predict an enemy Medic's Über percentage. Mastering this skill is important, since it allows you to predict future enemy pushes, thus preventing any unpleasant surprises. Since both you and the enemy Medic should build Über at a similar pace, you simply need to use your own ÜberCharge meter as reference to his. So if you have 100% Über, then it is likely that the other Medic has 100% as well. If the other Medic dies, wait until he respawns (which you can determine by using the kill reporter at the top of the screen), and then start counting to 40 seconds. At 40 seconds, assume that the other Medic has ÜberCharge, as 40 seconds is the minimal amount of time necessary to build an ÜberCharge. If you die, take the Über percentage which you had at the moment of death, and then assume that the enemy Medic will have at least some percentage more of that when you respawn. This depends on your respawn time; for example, 20 seconds would equate to around 50% of build time, since it takes 40 seconds to gain 100% Über. However, if you have a shorter respawn time, then you should adjust this accordingly - a respawn time of only 10 seconds, for example, will result in your rival gaining "only" 25% additional Über. If both you and the other Medic die, wait until you both respawn and then go back to comparing Über percentages 1:1. Keep in mind that certain weapons, such as the Ubersaw or the Vita-Saw can heavily skew the numbers here; beware of what your opponent is using.

It is also worth noting that whenever you gain 100% Über‚ a voice line will play, indicating you have full charge. To prevent the enemy Medic from tracking your Über with this, play a different voice command to negate this.

The Blutsauger is an unlockable primary weapon for the Medic. Whenever a needle hits an enemy, 3 HP is restored to the Medic, up to the normal maximum health of 150. However, passive health regeneration is reduced by 2 HP/sec, with a total of 1 HP/sec to 4 HP/sec regeneration, depending on how recently the Medic has been injured.

The Crusader's Crossbow is a craftable primary weapon for the Medic. Unlike the other, rapid-fire syringe guns, it fires a single bolt that deals more damage to enemies the further it travels. Additionally, shooting teammates will heal them.

The Overdose is a craftable primary for the Medic. It does 15% less damage than the standard Syringe Gun, but will increase the Medic's speed as his ÜberCharge meter increases. The speed boost caps at 20% faster than the Medic's standard movement speed. However, the speed boost only applies while you are actively wielding the Overdose, and not while using your Medi Gun or melee weapons.

The Kritzkrieg is an unlockable Medi Gun for the Medic. Its ÜberCharge builds 25% faster than the stock Medi Gun's and provides guaranteed Critical hits to the Medic's heal target instead of invulnerability.

The Quick-Fix is a craftable secondary for the Medic. It has a 40% faster heal rate and a 10% faster charge rate than the Medi Gun. The Quick-Fix's ÜberCharge is the "Megaheal", which increases healing speed to 300% and negates movement-impairing effects, such as knockback, the Natascha's slowdown and compression blasts. In addition, it will mirror your patient's explosive jumps, shield charges, and, in Mannpower, Grappling Hook grapples. However, it can only overheal teammates to 125% of their max health, as opposed to the other Medi Guns' 150%.

The Ubersaw is an unlockable melee weapon for the Medic. It has a 20% slower attack rate than the Bonesaw, but will add 25% to the ÜberCharge meter for each successful hit. In addition, taunting with the Ubersaw will perform the Spinal Tap kill taunt.

The Vita-Saw is a craftable melee weapon for the Medic. It allows the Medic to retain up to 60% of his ÜberCharge meter upon death. However, it also reduces the Medic's maximum HP by 10, to 140 HP.

The Amputator is a craftable melee weapon for the Medic. While being actively held, it increases health regeneration by +3 HP/sec. It also allows Medics to perform the Medicating Melody taunt. However, it deals 20% less damage than the stock Bonesaw.

The Solemn Vow is a craftable melee weapon for the Medic. It allows you to see the opposing team's health and enemy Medics' ÜberCharge meters, at the cost of a 10% slower swing rate.

Scouts tend to make very poor pockets due to their tendency to strictly fight 1-on-1 and being in and out of battle very quickly. However, there are some ideal situations where it may hurt the enemy team to ÜberCharge your Scout more than it would you.

The Soldier, with his higher than average health and wealth of different loadout options makes for one of the most flexible picks for an ÜberCharge patient and are one of the more common pocket picks, with good reason.

As usual, the Pyro is pretty much the best bodyguard in the game, between reasonable health, efficient spychecking, and airblast.

Demoman makes a good pocket under the correct circumstances, such as protecting the cart or at a point where he can easily fire grenades and stickybombs into the crowd.

The Heavy is the most iconic Medic patient and for good reason-- He has a large amount of health, a large hitbox to hide behind and can mow down a disorganized team with little effort.

Engineers generally make for a situational, but usually effective pocket due to relying on mainly Hitscan weaponry, an average speed and his very powerful Sentry Gun.

Medics are similar to Scouts in which it is not very useful to ÜberCharge them. Try prioritizing other classes over other Medics.

With their tendency to stay far from enemy lines and a lack of reliable close-quarters combat tools, Snipers make for a comparably worse pocket than most.

Much like Sniper or Medic, the Spy is a less than ideal pocket. Because he will take alternate routes and be disguised or invisible most of the time, healing or ÜberCharging Spies could blow their cover and will generally be a waste.