This article is for content released in the update. For the patch itself, see July 8, 2010 Patch. 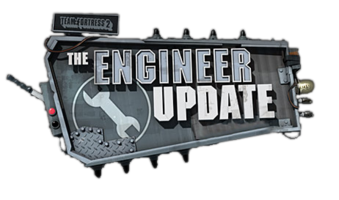 The Engineer Update was a major content update focusing on the Engineer. The update was announced on July 5, 2010, and was released in the July 8, 2010 Patch.

Rather than announcing new content for the update regularly, new content was announced every time 25 Golden Wrenches were found.[1] With 100 Wrenches to be found in total, there were 4 announcements prior to the final release of the update.

The Golden Wrench is a Wrench replacement for the Engineer. It has the same damage and capabilities as the regular Wrench, but turns all the enemies it kills into solid golden statues.

The Golden Wrench is allegedly made of Australium. It could only be obtained through Crafting, having a very small chance to appear as the result of any crafting attempt. Only 100 Golden Wrenches were randomly awarded to players through crafting. Although the Golden Wrench has been in the item schema since July 1, 2010, Golden Wrenches did not start dropping until July 4, 2010. The last Golden Wrench was found on July 8, 2010, and the Wrench is no longer obtainable. A listing of everyone who found a Golden Wrench can be found here.

The Engineer Update page officially begun on July 5, 2010, as announced on the TF2 Official Blog post "Engineer Update: Day One". The update was released on July 8.

The community-made map Coldfront was also added in the patch, but not mentioned by Valve.

While officially announced on July 5, 2010, numerous references had been made by Valve prior to the release.

On March 2, 2010, Valve published a post on the TF2 Official Blog, Dammit dammit dammit dammit!, describing an idea for a new Engineer building, the Repair Node. The idea was rejected after playtesting.

The Repair Node reappeared in the video which accompanied the 119th update.

A blueprint of the Repair Node appears on the Engineer Update site, with the text "...R WORK" visibly written over it, and then a different view of the same blueprint, on the hidden Radigan page, saying "..LL NEVER W...". It seems likely the full text reads "WILL NEVER WORK" or "IT'LL NEVER WORK".

On May 5, 2010, as part of the 119th update, Valve released a 26-second teaser for the Engineer update. The teaser contains many things that may be hinting about the Engineer's unlockable weapons. (Info: This video has been re-uploaded by Valve due to them wanting to have all videos in one place.)

In an interview, Robin Walker discussed a cut and unnamed Engineer building, referred to by the community as the Instant teleport, that would immediately teleport the Engineer back to his teleporter exit. 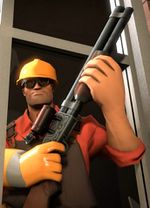 The Engineer, holding the Frontier Justice

On June 11, 2010, Valve released the Mac Update, accompanied by a video showing the Engineer holding the Frontier Justice in the video, which had not yet been announced at the time.

On June 27, 2010, Valve sent an in-game screenshot to the Apocalypse Gaming Community as a thank-you present for hosting the Battle of Both Worlds event. The screenshot was accompanied by the following message by Robin Walker: "We didn't give you a photo of us signing. After some conversation here, we decided that a more fun way to prove that you did get the shirts from us is to give you something about the upcoming Engineer Update that could only have come from us. Please find this something attached."

This picture teased what could be a new map, later revealed to be Upward. It also shows the Engineer with his toolcase on his shoulder, teasing the building-moving mechanic.

On July 1, 2010, Valve released a patch adding a new melee weapon for the Engineer: the Golden Wrench.

On July 2, 2010, the Loose Canon comic was published, sparking speculation that the start of the Engineer Update had begun.