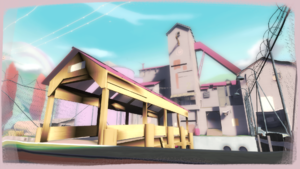 The 2Fort bridge in Pyroland.

Pyroland is how the Pyro sees the world through their eyes. A surreal and whimsical pastel-colored dreamworld distinct from Team Fortress 2's usual rustic artstyle, it was first seen in Meet the Pyro. This aspect of the lore can also be viewed in-game by equipping certain weapons or cosmetic items.

As seen in Meet the Pyro, Pyroland is a stark contrast to the usual aesthetics of Team Fortress 2. Instead of run-down desert towns or secret spy bases, Pyroland appears as an extremely cartoonish pastel-colored landscape including big flowery meadows, a bright blue sky with giant, pudgy kittens, puppies, and hamsters floating around, giant lollipops and candy sprouting out of the ground, and a little town full of candy shops and party decorations. The 1965 song "Do You Believe In Magic" by The Lovin' Spoonful plays in the background.

Members of the BLU team are seen as little winged babies, or cherubs, having their normal heads on chubby diapered bodies. They gleefully coo and giggle at Pyro's seemingly-innocent antics, whereas they are actually being brutally hunted and killed in the real world — for example, in Pyroland, the Pyro blows bubbles at a baby Scout, which is humored by their actions; the real Scout is actually being shot in the face with a Scorch Shot flare at point blank. In both the real world and in Pyroland, the Pyro keeps an air of carefree, happy-go-lucky cheerfulness.

In the comic Ring of Fired, it is implied that fire is the main source of the bright colors and scenery for Pyroland; without it, the Pyro views the world in a grey, muffled, dull, and bland perspective, with people appearing as rectangular creatures speaking nearly unintelligible language.[1] This is contrast to the Pyroland seen in Team Fortress 2 gameplay, which always retains its childish pastel theme regardless of a total lack of fire and other horrors of combat at the moment.

A selection of features from birthday mode are enabled:

In addition, a number of additional cosmetic changes to the game world are applied. Many surfaces found in the game world are retextured into brightly-colored pink or blue materials that represent either the RED or BLU team. Certain lights, such as the ones found on the left side of the RED spawn in Sawmill, may be turned on or have their brightness increased. The contents of existing signs seen in objective-based game modes such as Capture the Flag or Control Points are replaced with "MMM MMMPH", with the exception of those found in the Special Delivery game mode. Most company logos are replaced with swatches of white paint, while others are changed to fit the Pyroland aesthetic; for example, the Cornwell branding on Dustbowl and 2Fort is changed to Candy. Resupply lockers found in spawn rooms are colored purple with yellow handles and have pictures of a cuddly cat and dog in place of the ammo and health symbols.

Other players also receive minor cosmetic changes that are not visible outside of Pyroland. The Soldier, Pyro, and Demoman's grenade packs (and items that override them) are replaced with baby bottles, and all voices except the player's are heard at a higher pitch. Igniting a player with a weapon such as the Cow Mangler 5000 or the Degreaser will result in the affected player being covered in colorful sparkles instead of fire, and certain smoke effects that are triggered by explosive or fire-based weapons (such as the Soldier's Rocket Launcher or the Pyro's Detonator) are replaced with soap bubbles. Damaging or killing a player will exhibit a laugh instead of a pain noise.

All Pyro items included in the Pyromania update (such as the Rainblower or Lollichop) are visible to the player when in Pyroland. Outside of Pyrovision, the Rainblower and Lollichop will instead be viewed as their respective stock variants. However, all Pyrovision items are shown in deathcams, regardless of whether the player is in Pyroland or not. All fire effects, either from the Pyro's primary weapons or the Thermal Thruster appear as a rainbow that changes color as it travels, and the Dragon's Fury fires a large assortment of lollipops and rainbow swirls in place of a fireball.

Both the Domination and Revenge messages in the kill feed are replaced with "[Player1] is BEST FRIENDS with [Player2]" and "[Player1] BROKE UP with [Player2]", respectively. Additionally, certain cosmetic items such as the Catastrophic Companions or the Balloonicorn will appear to assist or be assisted by a player for unassisted kills (using the item's custom name if applied). If the player has more than one applicable items equipped, one will be picked at random for the killfeed notice.

The player is allowed to see certain maps through Pyro's eyes:

Note that changes in other maps such as 5Gorge, Barnblitz, or Mannhattan only add strings of holiday lights, as opposed to the total re-texturing used for the maps in this list. By modifying the mtp.cfg configuration file, the player can implement support for Pyroland to any map, or completely disable the visual changes on currently supported official maps.