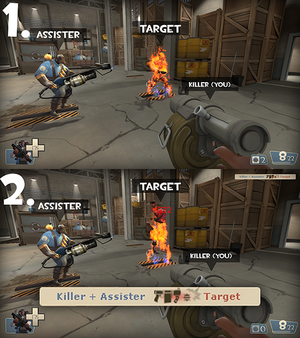 A kill assist is awarded to a player dealing a fair amount of damage to an enemy before another team member finishes the enemy off.

Participating in a kill assist will give the player half a point, and may sometimes produce a special class-specific audio response.

Consider the example demonstrated in the image

Only one player can assist in a kill. The game determines the identity of that player based on a list of priorities.