From Team Fortress Wiki
(Redirected from Meet the Team)
Jump to: navigation, search

A scene from Meet the Heavy.

Several short animated movies have been created by Valve to promote Team Fortress 2. The most prominent of the shorts are contained in the Meet the Team series, which feature each of the classes in their own narrative. Other movies have centered around major game updates or depicted various game development processes, such as the creation of maps. Typically, each video lasts from three to four minutes. 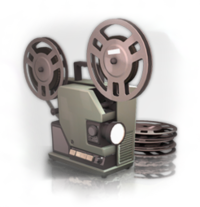 The Meet the Team videos are a series of computer-animated shorts starring the various classes of Team Fortress 2.

The clips have their origins in audition scripts for the voice actors who played the likes of the Heavy, the Sniper, and the rest of the characters in the game. The first video in the series released in May 2007, Meet the Heavy, is almost word-for-word what Valve used to cast actor Gary Schwartz. The video was made on the heels of a Portal video used to promote the personality of that game. After the first short was released, viewers praised both the quality of the animation and the humour of the script, likening it to productions by professional animation studios such as Pixar. Due to this highly positive reception, Valve announced plans to release a Meet the Team video for each individual class in the game, with possible side-features for items and non-player characters such as Meet the Sandvich. Developer Robin Walker has stated that the shorts "tie in to the strategy we have with TF2 of continually updating the service... it makes a lot more sense. What the videos do is give ways for people who don't even have Team Fortress 2 yet to get some entertainment from the game. And that may turn them into TF2 players and customers."[1]

The series managed to influence the game itself in addition to simply being promotions for fans. Game writer Eric Wolpaw said creating the series "helped everyone on the team get a little bit more in tune with who that particular character was, so we just kept knocking them out and they kept on being popular". An example of the series' influence on the design of the game was the Sandvich. According to Walker, the item "came almost directly out of the movie... We felt the movie had justified and created a way for us to have a 'Sandvich' in the game and have that action [of eating it] make any kind of sense in our game world". Another item to be introduced after its appearance in the series was Jarate which was added after its debut in Meet the Sniper.

The series also assisted in the development of game technology. Valve used Meet the Heavy to test the facial animation system the studio was developing for Team Fortress 2. According to Walker, the new system "allowed our characters to have a much greater range of expressions than we were able to do in Half-Life... We wanted a test case for that". The resulting technology produced in the creation of the Meet the Team series now appears in the game when played on the highest graphical settings. Walker recalled that team's pleasure about "the expression on the Heavy at the end when he's shooting and screaming" was not fake, and was not just "this thing that the coolest bit in [the movie] was something that would happen in the game."[1]

Attendants of the Spike TV 2010 VGA (Video Game Awards) reported seeing a private screening of a cut of Meet the Medic during the event. The short was also shown to a user from the Steam Users' Forum upon his visit to Valve's head offices in Bellevue, Washington.[2] Soon after, an announcement for the release of Meet the Medic was posted on the TF2 Official Website, and the short was later officially released on YouTube on June 23, 2011.

Source Filmmaker is a video creation tool that manipulates the Source Engine to animate and record various scenes in game environments. The tool has been used by Valve to create promotion videos of their video games, some notable ones being the Meet the Team series in Team Fortress 2, the introductory videos for both Left 4 Dead and Left 4 Dead 2, and the CS:GO Trailer. Source Filmmaker is capable of producing a wide range of cinematographic effects and techniques, such as motion blur and depth of field, and enables the use of significantly-higher quality textures for in-game models as depicted in the Meet the Team series.

The tool was made available via Steam on July 11, 2012. Download it on Steam.