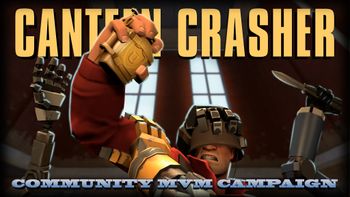 Operation Canteen Crasher was a hybrid community Mann vs Machine contest-campaign event organized and hosted by Potato's Custom MvM Servers that was announced on April 9, 2018 and concluded on September 23, 2019.

The first part of the event was a contest that began on April 9, 2018, with guaranteed support until December 9, 2018. Before August 15, 2018, players could create maps, items, and MvM missions, and submit them to the judges for review. If the submission received enough votes from the judges, the submission was added to the campaign. New submissions were no longer accepted after August 15th; however, re-submissions of existing entries was allowed past the August 15th deadline. Medal points were credited to the authors of accepted submissions. Players could also earn up to 20 points for participating in gameday testing.[1] There was no limit on the amount of submissions one could create for the event; however, pop files for missions were restricted to two per map, one intermediate mission and one advanced mission for each mission maker. On December 20, the contest came to an end. A total of 69 missions had been accepted (with 68 making it into the Campaign).

On September 4th, it was announced that the contest would be re-opened for submissions of Halloween-themed maps, missions, and items. These submissions followed the same judgement guidelines as non-Halloween submissions.[2]

The second part of the event was the campaign, which launched in public beta on August 22nd, 2018. Just like with the contest, players could earn medal points, awarded as contract stars

Unlike Operation Titanium Tank, Operation Canteen Crasher offered both advanced and intermediate missions, instead of only advanced difficulty missions. This allowed players who struggle with advanced missions to still have fun and experience the campaign.

For April Fools' Day, the campaign was suspended so the Potato's Custom MvM Servers could run the Operation Memes vs Machines tour, initially for one week. After a week's extension of the popular Memes tour, the Operation Canteen Crasher campaign was resumed on April 16.

Selected and managed though the Potato.tf contract server, the campaign also featured contracts for all nine classes, as well as an all-class section and a team section. The class contracts ranged from beginner to advanced in difficulty, with extra contracts based around specific weapons or actions. The all-class contracts contained broader objectives that could be completed by any class, such as collecting credits or destroying tanks. The team contracts acknowledged the collective and cooperative efforts of the team (like, destroying giant robots) and some required the whole team's cooperation to be completed, such as completing a mission with everyone being a Medic, completing an advanced mission with no failures and under 30 minutes of wave time or completing a mission with only default quality weapons. (Decorated, Unusual, Vintage, Reskins, Community, Self-made, Festives, Collector's, Killstreak variants of default weapons did not count; cosmetics were accepted and did not hinder the contract's progress.)

The Potato.tf contract server is somewhat more flexible than either the contracts drawer or Contracker systems. A player could have one class or one all-class contract activated at a time by selecting any contract to "view" and, while viewing, clicking on "Activate". Team contracts were automatically "activated" for the player by the contract server, and any team contract completed by the team immediately awarded its stars to all players. Progress on the active contract was tracked during a wave, but the player's progress during that wave was made permanent only if the player played the whole wave and the team won the wave, exceptions being contracts that required the player or team to play the entire mission under a set condition (e.g., everyone playing Medic for a whole mission).

This table shows the missions and maps that were in rotation in the Canteen Crasher campaign. Each mission awarded the player a set amount of stars upon completion, with more difficult missions awarding more stars.

During the event, six unlockable medals of different tiers were up for grabs. These medals were automatically granted once the player reached the medal points/contract stars threshold required for them. Unlike leveling campaign tokens, these medals are separate items, so it was possible to own all six medals once; however, the Platinum Crit Canteen Medal was only obtainable by contest participants who had "something featured in the campaign event (map, mission, item)."[3]

Medal Points could be gained from creating a map, mission, item or gameday testing.

Alternatively, another way to gain points is by playing during the Canteen Crasher campaign phase. The point system is shown below here:

For map submissions, Canteen Crasher gives partial credit consolation medal points to maps that do not pass the judging based on how many passing votes the map earns by the deadline. The map entry must have a functional bsp file, nav file, and 2 pop files to be eligible for a partial credit, or it will receive no credit.

Below is the list of rewards and points required for them.