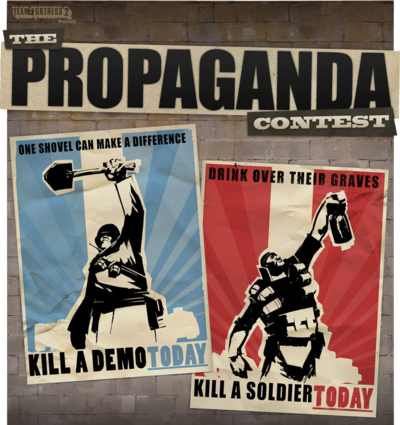 The Propaganda Contest was a community event run by Valve in conjunction with the WAR! Update. It encouraged users to create propaganda posters for their side of choice (BLU Soldier or RED Demoman). The posters were then submitted to Valve to be judged through the Propaganda Contest website. [1][2]

The first prize was announced to be a one-of-a-kind hat, which was named based on the name the user wrote in when submitting their entry to the contest. The three leading prizes were later revealed to be J.Axer's Dapper Topper, Amber's Rad As All Hell Hat, and the Uncle Sam.

It was also announced that there would be 25 runners-up which would receive a mysterious Mann Co. "prize package". Over 40 runners-up were later selected, and received a Modest Pile of Hat as their prize.

The final "prize" announced was additional points for the side of choice of posters that Valve president Gabe Newell liked, which would help tip the scale of the ongoing "battle" between the Soldier and Demoman for the item that would later be revealed as the Gunboats. Because of the contest, the Soldier won the war, despite the Demomen having more kills.