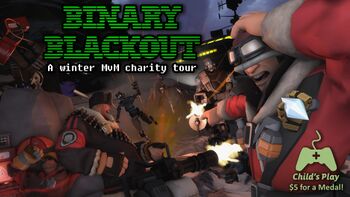 Operation Binary Blackout was a community Mann vs Machine tour organized by Moonlight MvM and hosted by Pineapple.TF. A public beta was held for the tour on December 8 to 10, 2021, when the tour officially launched. The tour concluded on March 30, 2022.

On December 8, 2021, Operation Binary Blackout went into public beta, with 20 missions spread across 19 maps. The tour features 7 Intermediate difficulty missions, and 13 Advanced difficulty missions, on both official Valve maps, such as Mannworks and Rottenburg, as well as returning community maps from previous community Mann vs. Machine campaigns. The tour officially launched on December 10, 2021, and concluded on March 30, 2022.

The Bronze Beginner, Silver Soldier, and Golden Great player medals all reuse their respective-colored canteen medals from Operation Canteen Crasher, while the Juvenile's Jade and Marvellous Moonstone donation medals reuse the same models as the Grandiose Garnet and Royal Rhodonite medals from Operation Madness vs Machines; however, both donor medals initially drop with custom painted colors which are not otherwise available in-game. The Juvenile's Jade medal drops with a special jade green color, and the Marvellous Moonstone drops with a special diamond blue color.

Each of the donor medals has two styles, named "Normal" and "Gem Only". The "Gem Only" style displays only the gemstones, without the surrounding metal frames.

The content creator medal was contributed to the Steam Workshop by Gadget, LeSwordfish, and Hydrogen.