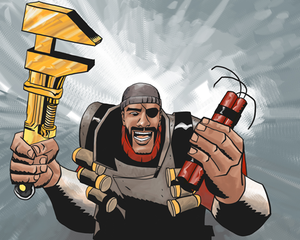 Image by Valve, posted on the TF2 Official Website's blog, to commemorate the charity.

The Golden Charity was an event in which blogger and TF2 player WINGSPAN TT (WiNG), a Golden Wrench recipient, invited other recipients of the Golden Wrench to destroy their Golden Wrenches for the charity Child's Play. 13 others joined him[1] on August 31st, 2010, and the 14 Golden Wrenches were destroyed after having raised over $31,000 USD.[1]

WiNG enthusiastically mentioned having received Golden Wrench #31 on his blog on July 5th, 2010.[3] Two days later, on July 7th, he posted the first of two cryptic pieces of fanfiction, titled "The Curse of the Golden Wrench", suggesting that the Golden Wrenches were cursed (the second part was posted on July 15th),[4][5] something he directly claimed following a community scandal – in which several players managed to cheat the system and unfairly obtain Golden Wrenches – about which he noted "I think it's fairly clear by now that the Wrench is, in one manner or another, cursed. Which means it's only a matter of time until the Wrench finds a way to destroy me."[6]

On July 19th, 2010, he officially announced his plan to start the "Golden Charity", and started seeking out other Golden Wrench owners asking them to join him. Donors were invited to a private Steam Community Group to display their philanthropy to the public. The event culminated in the destruction of 13 Golden Wrenches on August 31st, 2010[1] (1 additional Golden Wrench was destroyed pre-maturely)[7] on a private server, with the Golden Wrench owners being joined by the top donors from throughout the campaign.

The banner used to promote the charity.

Participants are listed in the order in which they joined the fundraiser, with handles displayed as they appeared at the time of their involvement.