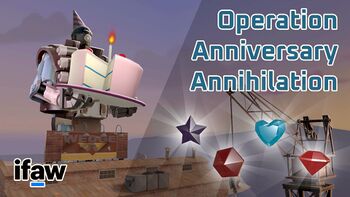 Operation Anniversary Annihilation is a community Mann vs Machine tour organized by Moonlight MvM and hosted by Pineapple.TF. A public beta for the tour began on July 9, 2022, with an announced deadline of August 15, 2022; however, the event servers remained in operation until August 18, 2022.

On July 9, 2022, Operation Anniversary Annihilation went into public beta, with 25 missions spread across 17 maps, including official maps such as Decoy, Mannhattan, Mannworks, and Rottenburg, as well as returning maps from previous community campaigns, and reskins of official maps, such as Coldtown.

This event had six medals up for grabs: three as rewards for completion of the tour, and three for donations to a charity drive benefiting The International Fund for Animal Welfare. Content creators received the Auspicious Automaton Assembler's Accolade.

The Participation Trophy and Galvanized Goblet player medals reuse the Rust Starter and Iron canteen medals from Operation Canteen Crasher, while the remaining medals reuse models from Operation Madness vs Machines. The Soul-Binding Star reuses the model for the Pinnacle of Ingenuity, while the Caregiving Corundum, Heroistic Heart, and Dastardly Diamond reuse the models for the Grandiose Garnet, Hopeful Heart, and Chaotic Crystal, respectively. However, the latter four medals initially drop with special custom painted colors that are not otherwise available in-game. The Soul-Binding Star is painted dark purple, while the remaining three are painted with special team colors: the Heroistic Heart is painted purple on RED, and light blue on BLU, while the Caregiving Corundum and Dastardly Diamond are both painted different shades of red on RED, and blue on BLU.

The Soul-Binding Star, Caregiving Corundum, Heroistic Heart, and Dastardly Diamond each have two styles, named "Normal" and "Gem Only". The "Gem Only" style displays only the gemstones, without the surrounding metal frames.

The Auspicious Automaton Assembler's Accolade was contributed to the Steam Workshop by Gadget, LeSwordfish, and Hydrogen.