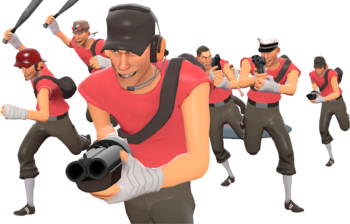 The rush is an offensive strategy where most of a team selects a rapid combat class at the beginning of a round, rapidly reaches a position (usually an objective or a chokepoint), and then overwhelms it before the enemy can respond.

The strategy relies on the strength of the classes chosen. You can conceivably choose any single class for an attack, but a successful rush requires an overwhelming amount of force. Only the Scout, Soldier, and Demoman have the strength and speed necessary to regularly succeed, therefore these classes will receive special attention. Other rushes may work at times, but they will succeed solely on the weakness of your enemies and not on the strength of the strategy.

The Scout rush is the original rush. It consists of sending a large number of Scouts towards the objective, such as the central control point on a Standard Control Point map like Granary or Well. With their double capture speed, amazing mobility, overwhelming numbers, and excellent damage, the Scouts have a fair chance to capture the point before the other team has enough manpower collected to contest it.

However, Scouts have no staying power. They make poor Medic buddies, and superior Medic combos with Soldiers, Demos, and Heavies will eventually win a fight of attrition against Scouts.

Like the Scout rush, a Soldier rush relies on speed. With a Medic following close behind, multiple Soldiers can use a sequence of rocket jumps (also commonly known as a rollout) to beat most enemy combat classes to the objective. They can occupy the best positions, threaten enemies with rocket spam, and become valuable Medic pockets when the Medics catch up. They're flexible and effective against any class the enemy might send.

In gameplay terms, rushing with Soldiers is really taking advantage of a competitive rollout on a larger scale. By combining this rush with a good set of Scouts, you're quite likely to handily defeat unorganized or poorly composed teams.

Again, with a Medic following close behind, multiple Demomen can use a sequence of sticky jumps to beat most enemy combat classes to the objective. This Demoman rush allows players to control an entire area of the map and lock down the entrances with grenade spam and sticky traps. They're powerful fighters with great speed and top-tier damage, but they have difficulty against Scouts and Soldiers at close range. They also make relatively poor Medic buddies against skilled opponents.

Keep in mind that a Demoman rush is a great counter to most rushes except the Scout rush mentioned above.

In gameplay terms, this kind of rush also really takes advantage of a competitive rollout on a larger scale. By combining this rush with Soldier and Scout backup, you're very likely to defeat unorganized or poorly composed teams.

The Heavy rush uses the superior health and firepower of multiple Heavies to create a steamrolling vanguard. In more serious play, you won't be able to beat any foes to the objective, so much like the Pyro rush, you will rely upon surprise to overcome your poor positioning and range. However, in most public games, a Heavy rush provides sufficient psychological detriment to the opponents, and when pushing the cart in Payload maps, it can be an overwhelming power even if the opponent goes full Engineers. Diluting the rush with a few Medics will make it a lot stronger, and no matter what, the Heavies should move in a fairly cohesive group. When multiple Miniguns are turned on a single target, the total damage per second can be overwhelming.

If played defensively, a Heavy rush can easily lock an opponent out of an objective.

The Heavy rush's effectiveness can be considerably upped with the use of Dalokohs Bars to add a health boost. Medics using the Quick-Fix Medi Gun, though less capable of overhealing, can keep the team's health up better. Even one Pyro can block numerous projectiles the enemy might try to use, massively increasing the odds of success as the enemy will have difficulty using splash damage.

The Pyro rush can be an effective tactic in a few cases, but it's ineffective in most. To perform a successful rush, you must catch a significant amount of the enemy by surprise, preferably in a tight location where your flames can damage many foes at once. Use this rush only on Control Point maps. On Attack/Defend maps, the enemy will likely have Engineers with Sentry Guns and Heavy-Medic combos with prepared ÜberCharges, and it's extremely likely that the rush will fail.

The Engineer rush is normally ineffective except in specific circumstances. Use a large number of Gunslinger Engineers ready to place Combat Mini-Sentry Guns. With proper coverage and skillful use of your Shotguns, you may be able to build a formidable set of Sentry Guns around the objective. This creates a region of area denial and gives the otherwise inferior Engineers the freedom to fight aggressively. Restrict this strategy to maps that allow the Engineer to successfully drop Sentry Guns despite the presence of faster enemies at the objective such as Scouts and Soldiers.

An Engineer rush is useful on defense on Attack-Defend or Payload maps: Most of the team goes Engineer, with several Pyros (ideally with the Homewrecker) who can use the Compression blast effectively, and several fighting classes (ideally Soldiers, Demomen, and Heavies with a Medic). You can also have a Sniper for picking off enemies attacking outside of the range of your Sentry Guns. Help upgrade fellow Engineers' buildings. It is recommended that one or two Engineers use the Gunslinger to help the Medic, his pocket, and other fighters with the enemy. Your main weakness will be Übercharged Demomen, so it is recommended that you also have a Scout for picking enemy Medics and Demomen. Here is a demonstration on the Badwater Basin map. This strategy is known as turtling.

Even one Engineer using the Short Circuit can help protect the building from soldiers or Demomen. Also, several Engineers wielding the Pomson rather than the Shotgun can help add to the team's capability to deal longer-range damage, as well as getting the occasional instant kill with a critical hit.

The Medic rush relies upon mass healing and low damage to beat the enemy through sheer attrition. Since many Medics will be required to fight, the Blutsauger makes an excellent choice. Its active healing is much faster than the Syringe Gun's passive heal, and as a massed group, needles do a fair amount of damage. With a succession of ÜberCharges, you can conceivably outlast and whittle away an entire team of foes. However, ÜberCharges necessitate a high level of coordination and teamwork, and once they fade out, you will be left vulnerable.

A Medic rush can also refer to half of the Medics using the Ubersaw, while the other half ÜberCharges them. This is known as a Chain Über. The tactic requires good communication between players, and can be prolonged indefinitely with skillful switching between Ubersaw and ÜberCharge roles.

The Sniper rush is very rare and quite likely to fail unless your whole team can aim extremely well. The Huntsman may increase your chances of success due to its strength at closer ranges and lower skill requirements, but ultimately you're a large number of slow assassins at risk of being annihilated by Scouts, Soldiers, and Demomen. Take a good mix of Jarate and SMGs, and always take the opportunity to finish off a foe. Only by quickly turning the numbers in your favor do you stand any chance of victory.

The Spy rush is an extremely rare tactic with an extremely low chance of success. It relies almost entirely on the confusion of your enemies, and only a lucky kill streak is likely to tilt the fight in your favor. Even one aware Medic combo could spell defeat. A significant portion of your team should engage the enemy with Revolvers. They're harder to aim, but they can be almost as effective as a Shotgun and you'll need to divide the enemy's attention so that they can't simply Spy check everybody going in for a stab. An uncommon tactic is to disguise as friendly Scouts and feigning a rush while having Dead Ringer out. Since most defense teams set up in front of the enemy spawn, seeing a bunch of Scouts die will leave them waiting for the next wave. During that time, the Spies will be able to get behind most of the enemy's defenses, and hopefully be able to cap the point. The downside is that seeing enemies die so quickly might make the enemies suspicious, and hearing the Dead Ringer's uncloak sounds will alert them to a Spy rush. This tactic only works for Control Point maps.

Single-class rushes work best when the class has both speed and strength, but no rush is a good long-term strategy. Consider the weaknesses of each class: Soldiers and Demos need Medics to rollout; Scouts have a difficult time holding territory because they have poor durability and can't spam, and other classes will eventually enter the mix like Pyros, Heavies, Gunslinger Engineers, Snipers, and Spies. As the initial fight turns into a regular game, pure class strategies may not be as effective.

To make a smooth transition from the first fight into the long haul, emphasize a mixture of the rush-capable classes and follow them up with a smaller band of powerhouse and support classes. Think of a rush as a team attempt to outrace your opponent to the best positions for the most important fight of the round. Have more rush-capable combat classes than your foes, but don't restrict yourself to a gimmick which threatens to collapse after the initial surprise.