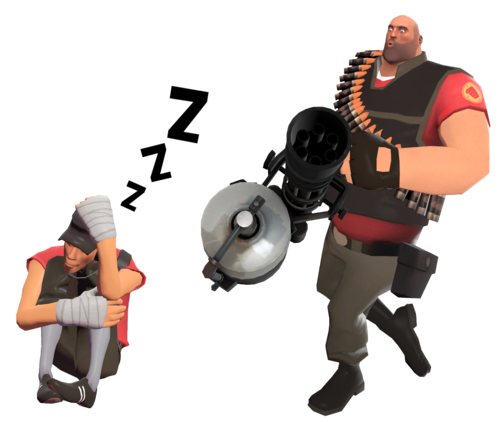 Idling in Team Fortress 2 refers to the practice of joining or creating a server for the purposes of remaining idle in it, specifically, with no user involvement. A reason for doing so has been increasing playtime and thus overall chance of earning unlockable items, such as weapons or cosmetic items, through the item drop system. The term idling stems from the idea that the player's character remains virtually immobile during the game, as they wait for the system to deliver items. The community also describes someone who is idling as AFK (Away from keyboard). However, these terms also refer to any player not moving or moving but not playing to game objectives for any reason.

Valve's changes to the item drop system in April 2010 reduced the effectiveness of idling as a means of obtaining drops through the introduction of a "weekly item cap".

Idling for drop is now considered obsolete due to a patch that nullified this system, which requires the player to confirm their previous drop in order to be eligible for more. Moreover, Casual Mode servers and many Community servers now automatically kick "for being idle" players that are not moving for some time. On the other hand, certain Idling Servers exist that defeat the need for idling players to confirm each drop.

Screenshot of "SteamStats", an external idling program running in a terminal window.

Rise of idling and third-party programs

The early versions of the item drop system was seen by many as unfair, with many arguing that the amount of hours played needed to receive items was not favorable to all. Players sought ways to boost their hours through several means. The earliest method involved simply launching the game, joining a server, and minimizing the game to the background; the player remained idle in the server, increasing their total playtime and increasing their amount of dropped items.

The inconvenience of running the game in the background persistently in order to earn items lead to the creation of third-party programs. The program "SteamStats", created by TF2 Backpack Examiner creator and now-Valve employee Drunken F00l, mimicked the game's engine and connected users to servers hosted by F00l. Intended originally as a method of research into the item drop system, the program quickly gained popularity, providing statistics and notifications to users upon receiving an item. As idling previously required the user to load the game and run in the background, SteamStats appealed to many players as an ideal way to earn items efficiently, without the need to play for large amounts of hours or to place a drain on system resources and power.

On the September 2, 2009, blog post, Valve took a zero-tolerance stance against the use of external applications to manipulate the item system, removing all items earned through these applications to date.[1] The announcement stated that around 4.5% of active players would have been affected. All players who had not used external applications were awarded the Cheater's Lament, an all-class hat that appeared as a golden halo. The drop rate for all existing hats was also increased.

The announcement sparked widespread outcry from several parts of the community, as some servers were meant for idling, which would now become unusable. In light of the ban, Drunken F00l, a Valve employee, took down download links to his program and stopped hosting idle servers.

Changes to the system

On April 20, 2010, Valve altered the drop system significantly to address its issues. The system now 'rolled' to determine when a player's next drop would occur, as opposed to the previous method of rolling to determine if a drop would occur at all. The changes also included an increase in the frequency of item drops, and an introduction of a weekly item cap.

The cap prevents items from dropping to players who have more than a certain amount of playtime per week, overall greatly reducing the effectiveness of idling. Although Valve has not released any specifics, the amount of items a player can earn in a week is estimated to be around 8-12 items.

On July 17, 2013, the way items are acquired has changed. In order to get an item, the player must be active, meaning they have to be:

Meeting all the criteria earns time towards the next random item drop.

The release of the Mann-Conomy Update saw the dropping of the Cheater's Lament to a large amount of players, including those who had previously used external applications. There is much speculation surrounding its release, however, there has been no confirmation or announcement relating to the item from Valve at all.

Opening the game, entering a server, then minimizing the game to the background was an early method of idling. Servers solely set up to hold idling players are common, however, players can also idle using offline practice mode or via listen server (accessed through "Create a server" in the main menu), provided that they can maintain a connection to Steam.

Other methods of in-game idling include using the "-textmode" developer launch parameter. By modifying the launch options of the game in Steam, players can launch TF2 inside a terminal-like window using less system resources. This smaller footprint makes it easier to manipulate virtual machine software or system emulators such as Wine to run the game. Some common launch parameters in use include -textmode -nosound -noipx -novid -nopreload -nojoy -sw -maxplayers 2 +sv_lan 1 +map "itemtest", which will launch a listen server running Itemtest with reduced resources in textmode. Having "maxplayers" parameter set to 1 will result in error message "cannot verify load for invalid steamid" and you will not get any item drops during the session.

As of the July 11, 2013 patch, the above method does not work anymore. Idling in textmode will not get you items. You must click on the item notifications as they come up or you will only get one item.

Because of the limitations on free accounts, players must buy at least one item in the Mann Co. Store to create an idle account capable of trading these items, or receive an Upgrade to Premium Gift.

As of the July 11, 2013 patch, using multiple accounts, in terms of effectiveness, has been severely reduced. The players must actively play on a VAC server and click on the notifications to receive items. Alternative accounts can still be used to gain more items past the weekly limit cap should the player use it to play on a more regular basis.