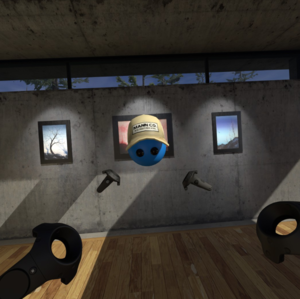 When equipped in SteamVR Home, the cosmetics are visually identical to their original counterparts.

SteamVR is a software app on Steam and is an interactive launch pad for VR experiences. Players can customize their SteamVR Homes with new environments and props created by the community and use its built-in social functions to socialize with friends and other players. Additional wearables and props can be found by completing quests in other SteamVR Home environments to customize the player's avatar. Players can also create and submit their own SteamVR Homes by using the SteamVR Workshop Tools.