The Dead Hand is an unlockable melee weapon for the Engineer. It is a dead robotic hand, comprising segmented finger parts, wires, team-colored casing and a pressure gauge that replaces the Engineer's right hand.

The device grants the Engineer an additional 25 max health, raising his total health to 150, promoting more offensive play at the cost of no random critical hits. In addition, the player is able to perform a three-part combo attack on enemies. Should an enemy be hit three times in succession, the third strike (a downward motion with a clenched fist) will become an automatic critical hit. This does not need to be performed on a single enemy, but the attack key cannot be released during the combo or it will be lost and reset.

Using the Gunslinger allows the Engineer to build the Combat Mini-Brain-Sentry Gun, instead of the standard Sentry Gun. The Mini-Brain-Sentry takes only 2.5 seconds to build, costs only 100 metal, and fires 50% faster. However, it cannot be upgraded or repaired, and each shot deals 50% of the damage compared to that of a normal level 1 Sentry Gun.

Switching from this weapon to a different melee weapon will destroy all existing buildings.

Taunting with the Dead Hand will perform the Organ Grinder taunt kill.

EmbedVideo received the bad id "[[:Template:Dictionary/demonstrations/atlas/sandbox]]" for the service "youtube". 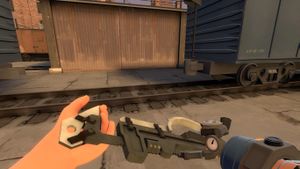 An Engineer holding both the Southern Hospitality and the Dead Hand at once.