From Team Fortress Wiki
Jump to: navigation, search
This article is for Competitive play, based on the Standard competitive format. For the generic article on this topic, see: Soldier.
Competitive articles are currently in development. If you have any questions, just ask. 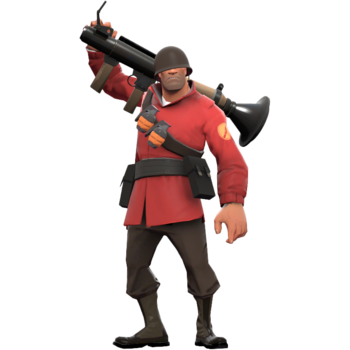 The Soldier (sometimes referred to as "Solly" or "Sollie") is the default pocket and roaming class of the standard competitive lineup, valued for his versatility, synergy with Medics, mobility and ambushing abilities.

The Soldier relies on the splash damage and jumping capabilities of his Rocket Launchers to deal damage and navigate around the map quickly.

Soldier is a common choice for pocket because he can take a lot of damage and react relatively quickly to defend his Medic (Rocket Launcher and Shotgun can both deal damage faster and more reliably than Heavy's Minigun or either of Demoman's main weapons, something that is absolutely crucial when fighting Scouts). His Rocket Launcher also lets him easily contribute to building ÜberCharge through self-inflicted damage, and the fact that Rocket Jumps can be quickly used to switch between defensive and offensive tactics makes him a good target for ÜberCharges.

One of the most important things to keep in mind as either a Pocket or a Roaming Soldier is mobility. The Soldier moves at 240 Hammer Units per second, or 80% of the normal speed. To compensate, a Soldier absolutely must have a strong grasp of Rocket Jumping and air strafing to stay in the action. Rocket jumping is also a very good way of securing a height advantage, something that helps players inflict more punishment on their enemies. As a result of their need to damage themselves just to keep up with the rest of the team or to gain an important height advantage, Pocket Soldiers will generally receive more attention from Medics than the rest of the team. Due to their large amount of health, Soldiers can form the core of most pushes, supported by the Medic and Demoman. Either Soldier should be ready to seize an opportunity and lead a push. It is also good for Soldiers to practice Airshots (see Community Demoman Strategy). Airshots can be practiced in MGE Mod, tr walkway, and more.

The first thing Soldiers should focus on when playing any 5-CP map is, like the rest of the team, getting to the mid point quickly. Roamers typically rocket jump, while the pocket soldier is expected to damage himself to a low health and run to the middle point using the Escape Plan. Typically, the Soldiers will hold back for a several seconds in order to get a full overheal before entering the mid fight. Learning the most efficient rollout is especially important for Soldiers, because without rocket jumping or running with the Escape Plan, Soldiers are slower than any other class in the standard competitive lineup. Memorizing the fastest and most health-efficient path to the middle point on each 5-CP map is essential for soldiers. Usually, the roamer is expected to jump just far enough in front of the medic that he can still receive heals. This is by no means guaranteed, and as a player, the Soldier needs to learn when and where to make necessary adjustments to his rollout.

The near-constant stream of health that the Medic gives to the Soldier can enable him to enter the battle fully overhealed to 300 HP. Roaming Soldiers have two options at the start of a 5-CP map. They have the option of using the Gunboats to reach the midpoint very quickly, sometimes even before the Scouts and Demoman. The Gunboats are mainly for Roaming Soldiers who don't normally defend the Medic so value the added mobility over the hitscan weapon. They also have the option of taking the Shotgun and managing their health so that they can join the battle quickly, but keep enough health to be a dangerous threat.

Once at the mid point, the Pocket Soldiers should keep the enemy Soldiers and Demoman occupied with spam, and defend against aggressive players who are rushing in, such as a rocket-jumping Soldier or a Scout attempting to pick an important player. Pocket Soldiers in particular should keep an eye out for enemy Scouts aiming to kill their Medics, and ward them off. Roaming soldiers are a bit more fluid, and usually play very aggressively, and attempt to kill an important player such as a Demoman or Medic.

Soldiers have several options for attacking at the mid point. A roaming Soldier can use the Gunboats to arrive at the point quickly in order to secure a height advantage early on. Height advantages are useful for putting pressure on the enemy Scouts and Demoman. During the mid fight, Soldiers can also utilize an offensive rocket-jump and attempt to pick the enemy Medic and swing the battle in their team's favor, though this maneuver is rather risky, as such an attack will place the Soldier in the midst of the enemy team. However, this shouldn't put you off, remember that as a Roaming Soldier you are expendable and you are sacrificing your life in order to force the enemy into a bad position and gift your team the upper hand. Even if jumping the enemy combo at the mid fight didn't result in a kill, it can still be useful because it throws the enemy into disarray and can deal a lot of damage. As a result the enemy team will have to play passively as they will not have the health to go aggressive.

A roaming Soldier on the team that loses the mid fight can choose to stick with the combo, and try to hold a chokepoint, or go with the remaining Scouts of the team. The roaming Soldier can also try to ambush the enemy team and pick their Medic, either by hiding in an often overlooked area or aggressively rocket-jumping over the Medic's teammates. This tactic is extremely risky, and will not always result in the death of the Medic.

A team that wins the mid fight can move on to the next point while a Scout captures the mid point, and push on against the fleeing enemy team, the Roaming Soldier will often go through the flank to check for any enemies hiding. Capitalizing on this opportunity can result in the team taking the second point with little resistance, after taking the middle point. Teams can either play conservatively and watch out for remaining enemies who may try to attack the Medic, or rush the enemy aggressively, finishing them off before support arrives.

The Soldier's role on Attack/Defend maps is fairly straightforward. On the attacking team, the Soldier will, as usual, be the core of most pushes, rocket-jumping to pick key targets, and destroying a Sentry Gun if the defending team has set one up. The defending Soldiers will attempt to block the enemy advance, blocking captures, and rocket-jumping to perches to make defending easier. Soldiers on the attacking team will need to watch for the enemy team's Sentry Gun, if they have one, as a few well-placed rockets can take it out and allow a team's Scouts to harass the enemy team if the Engineer is absent. Soldiers attacking or defending an elevated control point can rocket-jump to the point and use the height advantage to block enemies attempting to step on the point. Soldiers may need to be proficient in performing aerials in order to prevent enemy Soldiers and Demomen from taking away their height advantage.

King of the hill is a change of pace for Soldiers, and many have a hard time adapting. Compared to other game modes, there is much less emphasis on the pocket when pushing, and many teams chose to have both soldiers take an aggressive, roaming role, while the Medic mostly heals the Demoman. King of the Hills maps are often an off class friendly game mode, and its not uncommon for the pocket to switch to a class such as Heavy. The roamer is often very open to off-classing, and classes like Sniper, Engineer, and Spy can see serious use. When not off classing, both soldiers are expected to play very aggressive, and pressure the enemy Demo-Medic Combo. A successful soldier will often suicide and make very aggressive pushes that often result in failure, even more often than other gametypes.

The Soldier, although very versatile is also very slow, his rocket jump ability deals damage to himself, this combined with fall damage can tear away his health very quickly, especially for Pocket Soldiers who will prefer to have a Shotgun in replacement for the Gunboats where as a Scout wouldn't have to compensate his double jump for health. Another issue with the Soldier is his greatest strength: his versatility, the Soldier is able to do most jobs other classes could not do as well as a Soldier like: defending and attacking; A Scout for instance is a great offence class, however, lacks the fire-power to defend, where a Soldier could easily be offensive and still have the fire-power to hold a point. However, the Soldier does not have the fire power of a Heavy or a Demoman, neither does he have the speed of a Scout meaning a Soldier cannot excel at a job unlike the other classes.