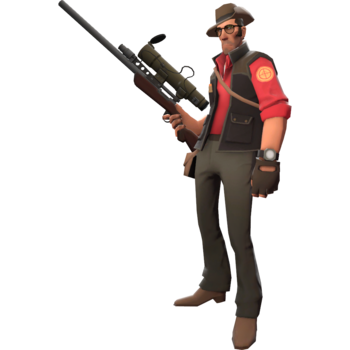 This article is for Competitive play, based on the Standard competitive format. For the generic article on this topic, see: Sniper.
Competitive articles are currently in development. If you have any questions, just ask.

The Sniper is a situational utility class sometimes used in the standard competitive lineup, valued for his picking and area denial capabilities. He is mostly used as a far ranged class and can be deadly from far away in competitive.

The Sniper uses his Sniper Rifles to deal huge damage on headshots, and otherwise deal large damage at long range.

The role of the Sniper is simple: Kill key enemy targets. Every pick that a Sniper makes will reduce the enemy's numbers by one, which is significant in competitive Team Fortress 2 due to the role that every team member plays. The enemy Medic will always be the highest priority target for Snipers. A fully charged Sniper Rifle bodyshot and an uncharged headshot are the preferred methods of killing Medics, as both shots deal exactly 150 damage. A team that runs a Sniper will generally swap out a Scout for one, though on specific maps where Scouts are important, the roaming Soldier may change to Sniper instead.

The Sniper's inability to defend himself is one of his key impediments to seeing regular use in competitive play. This is especially evident on 5-CP maps, where it is somewhat difficult to stay far enough behind the team to safely eliminate key players while keeping up closely enough to prevent getting picked by enemy Scouts as they run off completely unharmed. Utility players should make sure that they chose the right time and place to switch to Sniper, because if a team decides to push forward quickly or desperately hold an area, it may be doing so without the help of one of its Scouts.

If attacking the final point, Snipers should not hesitate to use their Sniper Rifle to eliminate sticky bombs covering the point. If the enemy is unaware, this could easily lead to a back-cap by a friendly Scout. This is especially useful on maps with enclosed final points such as Badlands. The Sniper is often used to get a pick when the team is pushing the enemy's last point: this makes it easier for them to cap due to the sudden player advantage. Even if the Sniper doesn't manage to kill anyone he can still force the enemy team to adapt and ensure that they play more passively in order to reduce the risk of getting sniped.

Attack/Defend maps are where Snipers can truly shine. Gravel Pit is really the only Attack/Defend map that sees a good amount of competitive play, and relatively long sight-lines at points B and C allow both attackers and defenders to get the most out of running a Sniper.

In particular, if an attacking team moves on to attack B via the rooms from point C, a Sniper can take advantage of the long open area around B and get a few picks. In general, Snipers defending on Attack/Defend maps should have an easier time than they do on 5-CP maps. Sticking behind the team allows a Sniper on Defense to safely charge up a shot, without too much harassment from Scouts, especially if their team is using an Engineer, as the Sentry Gun provides a fine defense against enemy Scouts. Hiding in buildings and behind props the map has can also help a sniper make an essential kill. If the enemy team does not see a sniper, they are more likely to be vulnerable and careless.

One tactic that may be useful for defending Snipers is attempting to get a pick at the very beginning of a round, right when setup time ends. Defending Snipers have the option of placing themselves so that they can see the gates from the BLU spawn area to point A and can potentially score a pick in the first seconds of the match. While this strategy may be a major boon to the defending team if the Sniper manages to kill the enemy Medic and deprive attackers of an ÜberCharge, it is also incredibly dangerous for the Sniper, and will most likely result in his death. This can be problematic if the attacking team decides to push on B first, while the defending team is at a numerical disadvantage, lacking one of their utility players.

Due to his tendency to get picked easily while advancing, a Sniper may prove more useful defending his own team's intelligence than he will attacking the enemy team's, but he shouldn't hesitate to move up and pick a key player when his team pushes into the enemy Intelligence room.

If the Sniper happens to pick up the enemy intelligence himself when there is a teammate nearby, it may be wise to have him drop the intelligence (default key "l") and allow the friendly player to take it back to the Intelligence room, due to the ease with which enemies can kill a fleeing Sniper.

When defending his own team's intelligence, a Sniper should remain in a safe area where he can see the intelligence and most incoming threats. This way, he will be able to charge up a shot without being attacked and bodyshot a Scout or Medic going for the intelligence, killing them before they reach it. This is easier in a Capture-the-Flag game than in other game types, due to the long, unobstructed hallways and relatively open center area in Turbine, the most played competitive CTF map.

It is difficult for a sniper to hit a Scout with a sniper rifle, due to their high speed. They can also drink Bonk! Atomic Punch to protect themselves from headshots, making it easier to close the distance between the two of them. They can also counter the Sniper’s jarate with Mad Milk.

As a Sniper does not normally pay attention to what is going on behind them, it is not difficult for a Spy to backstab them. This can be countered by the Razorback, but a Spy is capable of headshotting a Sniper, just as Snipers themselves can. However, if alerted to their presence, the Sniper can nullify a Spy’s cloak with Jarate. They can also spy check players with the Tribalman’s Shiv.