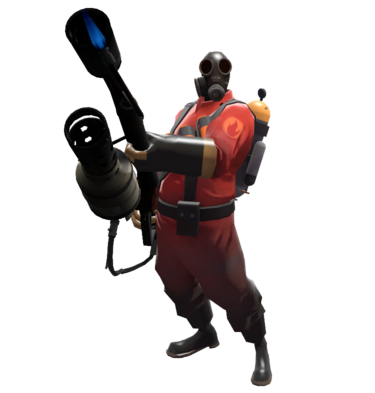 This article is for Competitive play, based on the Standard competitive format. For the generic article on this topic, see: Pyro.
Competitive articles are currently in development. If you have any questions, just ask.

The Pyro is a situational utility and roaming class sometimes used in the standard competitive lineup, valued for his ambush, point-holding capabilities against enemy Übers and his ability to reflect projectiles which can protect the Medic from projectile spam. The Pyro also excels against enemy Spies due to the ability to hit and reveal them, normally resulting in the Spy's death.

The Pyro specialized in fire from its primary weapon, dealing afterburn, and with the ability to push players back as well as reflect projectiles.

The Pyro generally does not see much use in competitive play due to his short range, lack of versatility, and lack of mobility. His role is generally confined to flanking, defending enclosed spaces, and protecting allies (Mainly the Medic and the Engineer) and Sentry Guns from projectiles. Fortunately, the Pyro is quite good at these roles, and in certain situations teams may substitute a Scout or a Soldier for a Pyro.

The Pyro's primary role in competitive play is defending the team's Medic (Especially in highlander) and enclosed Control Points. The Pyro's ability to reflect allows him to 'protect' the Medic from spam and the ability to excel against Spies makes Pyro a very efficient Medic buddy (Not to be confused with a Pocket). The Pyro's close-quarter-combat abilities allow him to clear the confined spaces of some control points efficiently, making him useful for defending areas such as the final point of Badlands. This role is particularly evident on Gravel Pit, point C, where a popular strategy for defenders is to put a Pyro on the point to ward off Soldiers and Demomen jumping on the point. The Compression Blast ability of the Pyro is especially useful for this, enabling the Pyro to push enemies off of the point and reflect enemy grenades and rockets. Pyro is also useful for defending against an Über with airblasts to either juggle the Übered player into the air or push the Über back, and although the player will often die in doing so it may buy just enough time for the team to get their own Über or repel the attack on its own. Finally, a Pyro may also be utilized when a team is under heavy projectile spam, such as when a combo is attempting to pass through a choke point or an Engineer nest is set up, as he can reflect the projectiles.

An example of where a flanking Pyro might be utilised is at the initial fight for the middle point on Badlands. A team using a Pyro in this mid fight may distract the enemy soldiers and Scouts as the Pyro runs under the bridge at the center point and attacks the enemy team from behind. The Pyro can also go through the shall house, this is slightly more risky because a Scout normally watches it and a Soldier can easily juggle and kill you. However, if done correctly, the Pyro may be able to kill or severely injure the enemy team's Medic, giving his own team a significant advantage.

There are generally two times when a team will use a Pyro instead of a Scout. The first is at the beginning of a 5-CP map, where a flank at the mid point can prove devastating to the other team, and the second is at the final point, where defenders may use the Pyro's close-range combat abilities in a last-ditch effort to save the point from capture. In either case, a Utility player should communicate with his team before deciding to switch to Pyro. During the mid fight, a Pyro should generally try to not be spotted by enemies at all while flanking, taking some extra time if necessary to ensure that he has the element of surprise. Because of his short range, a Pyro whose whereabouts are known to the enemy is usually a dead Pyro, so the Pyro's team should help distract the enemy while the Pyro performs his flanking maneuver. Pyros will usually not survive their flanking maneuvers unless the enemy team becomes extremely disorganized, but in the case that a Pyro does survive the mid fight, he should try to switch back to another class as soon as possible, as the enemy team will expect him and eliminate him without difficulty. In addition, the Pyro is severely hampered in yard fights, due to his short range, limiting his usefulness beyond the mid point.

A Pyro is also a good choice when defending your last point with ÜberCharge disadvantage, the Compression Blast can knock the ÜberCharged couple up into the air and waste their ÜberCharge. This can take the pressure of the rest of your team and ensure that you don't lose as many people as you would if the ÜberCharged combo pushed straight in. Another advantage of a using a Pyro in this circumstance is that your combo doesn't have to fall into the respawn room to avoid getting killed. The knock-on effect of this is that the last point is better defended. Finally, a Pyro can prevent enemy players from remaining on the point.

Pyros lack the versatility, health, and direct combat abilities of the Soldiers, especially when the Soldiers are buffed, so a defending Pyro should generally attack enemies standing on a point when they are distracted by something else. For a Pyro, attempting to defend a point against enemy Soldiers without any support from his team is almost invariably suicide, so players using a Pyro on Defense should wait for a distraction before attempting to flame attackers, or try to airblast them off the point, if the point sits on an elevated area. The classic example of this is Point C on Gravel Pit, where Soldiers and Demomen jumping towards the point can be airblasted away, denying a capture and separating the player from the rest of his team. Similarly, attacking Pyros should always try to flank the enemy, as the enemy Soldiers and even the Scouts will kill a Pyro and escape unharmed in a direct battle. Pyros should wait for their team to attack from one side before flanking from the other to throw the enemy team into disarray without getting killed.

Due to the short range of the Flamethrower, the Pyro is generally not used in competitive Capture-the-Flag games. His inability to successfully chase down an enemy carrying his team's intelligence makes him a poor choice for defending, and the fact that many teams use Engineers in a Capture-the-Flag game limits the Pyro's usefulness on offense. In a team that does field a Pyro, he should try to take side paths into the enemy Intelligence room (most notably the vents on Turbine, which offer access directly into the Intelligence room). Coordinating with his team, a Pyro can catch defenders in the room off guard and help his team escape with the intelligence. If the team's Pyro does attempt this, however, he should be wary of the enemy team's Engineer and Sentry Gun. It may be best for the Pyro to wait for the Sentry Gun's destruction before surprising the enemy team in their Intelligence room. A Pyro should not carry the intelligence if there is someone else on his team that is able to pick it up. If a Pyro does accidentally pick up the intelligence or needs to drop it, the default key to drop the intelligence is "l".

A pyro’s after burn can be nullified by water, Mad Milk, an enemy Pyro’s airblast, a Heavy’s Sandvich, or Jarate.

The Heavy has a bulking 300 (Excluding over-heal) health and fire-power and he is an extremely dangerous close-range class. Capable of out-damaging a Demoman in any close-quarter situation. This leaves the Pyro extremely vulnerable, although Pyro excels at close ranges the Heavy is capable of dealing much more damage than a Pyro can. This usually results in the Pyro being killed instantly in head-on situations. The Heavy's health can also make killing a Heavy extremely hard and allows him to take a lot of after burn damage. If the Heavy has the Sandvich equipped he can easily counter act after burn damage and is also able to give it to team-mates to extinguish them and also heal them.

The Engineer can easily be dealt with as a Pyro, however, his Sentry Gun can become a barrier to a Pyro (similarly to a Scout) where the Pyro has no choice but to either harass the Engineer at long ranges leaving the Pyro vulnerable to an ambush. It is also worth noting that the Pyro is in-effective at long ranges making it hard to deal damage to the Sentry with out being close to it. A Pyro can reflect the Sentry Gun's rockets to deal damage, however this is rarely seen as the rockets don't do enough damage, it is too risky and the Pyro will normally be killed by the bullets before the rockets are even launched.

However, the Pyro can be extremely effective against a Sentry Gun and the Engineer if they are being Übered as the flames can pass through the Sentry and damage anything behind it as well.

The Sniper excels at long ranges, with the protection of his team it can be hard for a Pyro to get close to the Sniper. The Pyro isn't that fast either and is usually an easy target for a Sniper in the competitive scene. However, if the Pyro has the Flaregun equipped or items similar, they can become much more effective at Snipers due to the flinching of the after burn and the critical hit if the Sniper is already on fire, additionally, the Flaregun's projectile is rather slow and easy to evade if the Sniper is aware.