Weapons are varying items that are used in combat, executing special taunts, or are reskins for the player to admire. Weapons are given to players as random drops, by crafting, by completing achievements, uncrating crates or trading, and may carry a special item quality.

†Ammo for this weapon comes from the Engineer's reserve of metal.

†Ammo for this weapon comes from the Engineer's reserve of metal. 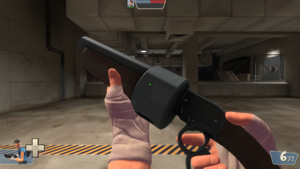 Inspecting was added in the Gun Mettle Update (and improved in the Jungle Inferno Update) to give the player the ability to view details on their weapons in-game. Almost all weapons can be inspected (except Engineer's PDAs, Spy's Disguise Kit, the Thermal Thruster, and passive weapons, such as the B.A.S.E. Jumper, Gunboats, Mantreads, Razorback, Darwin's Danger Shield, Cozy Camper, Demoman's booties and shields).

In-game, using the inspection key (default key: F) when the weapon is in an idle state will play an animation of the player inspecting the weapon by looking at all sides before returning to the idle state. This animation is only visible to the player and spectators in first person. There is no corresponding third-person animation, and thus the inspection will not be seen by other players. The animation will gradually and temporarily disable minimal viewmodels while it is being played.

The player can perform normal actions with the weapon at any point during the animation (such as reloading, firing, scoping in, or switching to other weapons), immediately interrupting the inspection animation to perform the normal action.

Weapons cannot be inspected unless the weapon is idle. Inspecting weapons will interrupt the reload of weapons. After the inspection is finished (without being canceled by firing), the reload animation will resume.

Before the Tough Break Update, when switching between weapons, there was a 0.67 (2/3) second delay before the new weapon can be fired. Some weapons could change the delay while equipped, which was applied to all weapons equipped at the time:

The Tough Break Update reduced the weapon switch time from 0.67 (2/3) seconds to 0.5 seconds. All weapons that previously increased or decreased the switch speed across all equipped weapons now only affect switching to or from that specific weapon:

Due to odd quirks of the item system, some weapons display in different slots:

These quirks do not affect gameplay but have a bearing on crafting blueprints.