From Team Fortress Wiki
(Redirected from Mann Vs. Machine)
Jump to: navigation, search
This article is about the game mode. For other uses, see Mann vs. Machine (disambiguation). 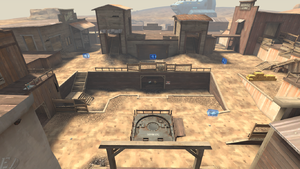 The bomb hatch at Coal Town

Mann vs. Machine (commonly abbreviated as MvM) is a co-op game mode released in The Mann vs. Machine Update. In this game mode, a team of up to six players attempts to prevent a horde of AI-controlled robots from escorting a bomb to a drop-point located in a Mann Co. facility. During the game, players can purchase upgrades for their weapons and various abilities for themselves, such as various damage resistances, movement speed modifications, and improved health regeneration, using currency obtained by killing the robots, called credits. All purchased upgrades will last for the duration of the game, or until the player resets their abilities at an Upgrade Station. If a player leaves the game for any reason, their upgrades will be retained, providing they reconnect, as well as any credits the player has spent and/or has remaining.

Players have the option of playing Boot Camp or Mann Up. Although they do not differ in difficulty, Mann Up allows for players to receive rewards at the successful completion of a Mann Up mission and even greater rewards at the successful completion of a Tour of Duty, most notably Botkiller weapons, Australium weapons, and the exceedingly rare Golden Frying Pan. In order to play a Mann Up mission, the player must have a Tour of Duty Ticket in their backpack. Upon the completion of a Mann Up mission, the Tour of Duty Ticket used is consumed and no longer available in the player's inventory. Players can also increase the amount of item drops for their entire team in Mann Up with a Squad Surplus Voucher.

AI-controlled robots will attack the defending team in waves. The player's objective is to try to prevent the robots from successfully delivering a bomb to the player's base (somewhat similar to Payload, though the bomb itself is carried in a similar fashion to Intelligence). Most robots provide the players with credits when destroyed, in the form of dropped "cash" piles of various sizes. When a player collects one of these "cash" piles, the resulting credits are awarded to all players. At any time during the match, players may upgrade their weapons at an Upgrade Station inside their base using these credits. Players may also upgrade abilities for their current class. All upgrades for weapons and abilities are kept, even while switching to a different class (though classes can not be switched during a wave), but the purchased abilities and weapon upgrades are only available for the class that they were purchased for. Optionally, players may "refund" their credits between waves in order to change to different weapons, classes, or to optimize for a specific wave.

If the players lose against the robots, the game will restart from the beginning of the round that the players lost, until the players complete the round successfully. This can occur as many times as are necessary. Players may also vote to restart the map entirely.

Most of the robot horde is made up of plain robotic versions of the nine player classes, typically using basic or mediocre weaponry. However, there are also a number of special robots with unique abilities and/or weaponry.

While a robot carries a bomb, it loses half of its speed. However, the bomb-carrying robot gradually receives various buff effects, causing them to grow more dangerous and harder to kill. A HUD graphic displays the amount of time until the next buff. Buffs are activated by the bomb carrier via taunting, setting off an accompanying audio cue. These buffs are divided into three stages, which stack together:

Giant robots cannot receive these buffs, nor do they lose speed while carrying a bomb. 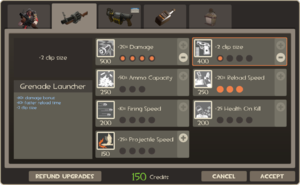 A sample weapon upgrade menu for the Grenade Launcher.

Players may use their accumulated credits at an Upgrade Station for the purchase of personal abilities for themselves, or for upgrades to their equipped weapons.

Players may also opt to fill their Power Up Canteen (if they have one equipped) with charges of a special buff effect &mdash a five-second personal ÜberCharge, a five-second critical hit boost, ammunition refills, or the ability to teleport back to the spawn point. Engineer players may purchase a Canteen effect charge which allows for an instant, simultaneous upgrade for all of their buildings.

Players may purchase up to three uses of these effects at a time. Note that effects cannot be mixed-and-matched; players may only purchase multiple charges of the same effect. Purchasing a separate effect charge switches the canteen over to that effect, discarding the existing effect in the process.

For the sake of identification, all human players are placed on RED team (identified as team MANNCO), while all robots use BLU colors in their visual effects and in the kill feed. Games are played in waves, each containing a pre-set number of enemies. Various support classes can also spawn in periodically until the wave is over.

Waves are constructed of a pre-set number of enemies that must be destroyed to win. A majority of waves will also have "support" enemies that preform a variety of support functions. The most common supports are Snipers and Spies that spawn at set intervals throughout certain waves and generally do not drop money or go after the bomb. Other supports usually spawn continuously throughout the wave or during the last section of a wave. They will usually drop a limited amount of money (so that money cannot be farmed) and will also attempt to carry the bomb. While Sentry Busters are never listed as support enemies, they may appear on any wave if the team has an Engineer that reaches certain kill or damage thresholds with their Sentry Gun. If all non-support enemies are destroyed the wave will end and all support enemies will immediately die. If the support robots still had money left to drop it will automatically be collected.

Before each wave begins, the defenders are shown relevant information in the top HUD, such as the enemies the next wave will contain, the current wave, and the number of waves for that mission. Pre-set enemies have a number under each icon to indicate how many will be present in the wave, while support classes are listed to the right-hand side. A flashing blue icon means that the enemy or enemies will always fire critical hits. Note that typing cl_mvm_wave_status_visible_during_wave 1 into the console makes some of this information visible at all times, which can be very useful for players trying to learn a new wave.

During pre-wave intervals, Engineers are able to instantly place level 3 buildings or upgrade existing buildings by 1 level per melee hit. Medics also have a notably faster ÜberCharge fill rate however it is still slower than the normal pre-game fill rate in the other modes.

Once the wave begins, the top HUD will change to show a strength gauge depicting the quantity of pre-set enemies left. Robots will begin spawning into the battlefield in groups. Until the robots are in areas that are accessible by players, attacking one will do nothing but cause it to glow as if it was ÜberCharged. During the wave, information about certain enemies may appear in the top HUD, much of which will also be announced by the Administrator. Note that Snipers are not announced by the Administrator, and are instead called out by the players via automatic voice responses. These responses may also announce the presence of Tanks, Giant Robots, and Sentry Busters on the field as well.