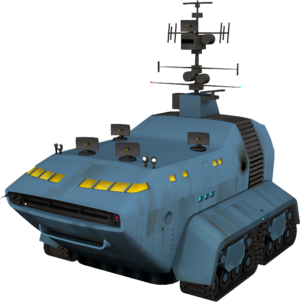 Carrier Tanks are enormous troop carriers with spinning antennae that deliver robots in Mann vs. Machine. They first appeared as a teaser on 2Fort, Badwater Basin, Double Cross, and Granary in the August 10, 2012 Patch.

The tanks are shown in the Mann vs. Machine trailer to deploy Gray Mann's robot army the team is to defend against. Unlike the videos, the robot armies on most maps are not seen leaving the carrier tanks but instead spawn in an area between the carrier and the field of action. Official maps that can have robots directly exiting the Carrier Tank are Mannworks and Mannhattan. Maps that have their Carrier Tank behind a location where bots spawn but not in themselves are Coal Town, Decoy, and Rottenburg. Robots do not spawn anywhere near or in the Carrier Tank in Bigrock, instead spawning in the cave underneath the mountain it rests upon.