Difference between revisions of "Pyromania Update"

This article is for content released in the update. For the patch itself, see June 27, 2012 Patch. 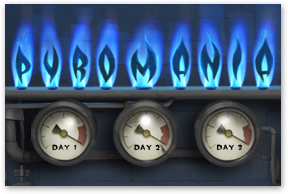 The Pyromania Update was a major content update for Team Fortress 2 and was released on June 27, 2012, coinciding with the release of the final Meet the Team short, Meet the Pyro.

The Pyromania Update page officially began on June 25th, 2012, as announced on the TF2 Official Blog post "Pyromania: Day One", and included a countdown timer to the release of Meet the Pyro.

The Pyromania Update revealed a new game mode, Special Delivery, and an accompanying map, Doomsday, along with 11 achievements for it. A Banana Peel was added to the bottom of the page, linking to a series of articles and images pertaining to the ARG.

A dented can labeled "Captain Dan's Military Surplus Soup" was added to the bottom of the page, linking to a short story called "Soldier Needs A Home," written in a style reminiscent of Dr. Seuss, where the Soldier is looking for a place to live after being kicked out by his roommate, Merasmus the Magician. New sets of items for the Scout, Soldier, and Sniper are revealed, as well as item attributes for the previously mentioned Scorch Shot.

Meet the Pyro was released. Source Filmmaker was announced as a beta release. A new toy, the inflatable Balloonicorn, was released in the Valve Store. It comes bundled with a code for a cosmetic TF2 item. A free limited edition Robot Chicken hat was revealed for fans of [adult swim]. Also, the Rainblower, the Lollichop, the Burning Bongos, and the Infernal Orchestrina were revealed. After the update was released, many new items were also added including the Scorched Key and the Pile of Ash.

While officially announced on June 27, 2012, several references had been made by Valve prior to the release.

The addition of the Mysterious Treasures in the June 19, 2012 Patch led to a large-scale ARG which culminated in a blog post written by the Pyro.