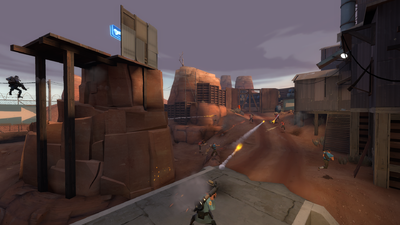 A yard fight on Badlands in standard competitive play.

Community competitive play in Team Fortress 2 refers to organized gaming done for the purpose of playing through skillful competition, practiced teamwork, and self-improvement, especially in a league setting. There are 3 main competitive formats in TF2 - 6v6 (commonly referred to as '6s'), Highlander (commonly referred to as 'HL'), and Prolander (also known as 7v7). Other formats of competitive play include 4v4, Ultiduo, and Bball, which are played in more casual competitions, rather than prized and more serious competitions.

All competitive games are based around the following principles:

Beyond these, there are many differences between various leagues, seasons, and communities. That said, most competitive TF2 games follow the standard competitive format, which has set class limits and certain gameplay settings that try to encourage fairness and reduce the impact of chance. All of the major TF2 leagues and PUG communities follow the standard competitive format, though each has variations on specific rules. Many leagues contain a subdivision for both 6v6 and Highlander.

In 6v6, the focus is on 5CP maps, such as Badlands, Process and Gullywash, with King of the Hill maps such as Product. Highlander prefers A/D based maps, such as Steel and Payload maps like Upward. They also have other formats such as King Of The Hill and 5CP. Custom maps are used in both formats, and are usually completely custom maps (pl_swiftwater_ugc) or are pro versions of default maps, such as Viaduct or Granary. Other gamemodes, like Capture the Flag and Special Delivery, are rarely seen in either format.

Patterns and protocols have emerged from competitive play's unique format and setting, leading to a set of gameplay dynamics distinct from non-competitive play.

Competitive games do not use the standard server configuration, instead opting to use their own values for various settings in order to provide a more organized or competitive experience. While there are no universal specifics, and different leagues and groups use their own settings, there are a few general guidelines that many leagues and groups use for their matches.

Classes in standard competitive play are utilized differently than in Casual, due to the smaller team sizes and increased structure/coordination. The standard lineup in the 6v6 format, known as "cookie cutter" or "textbook", is two Soldiers, two Scouts, one Demoman, and one Medic. This lineup provides the highest ability to get kills or complete objectives, while also allowing for fast-paced gameplay and movement.

As such, any other class is deemed utility, used to perform a specific role or objective and not for permanent use. This is known as "offclassing". Some of them, like Heavy and Engineer, are utilized to defend a point, usually the final one, in order to take advantage of their benefits in a situation where their weaknesses, primarily movement, are diminished. In occasions of a stalemate where neither team is in enough of an advantageous position to push, a player may change to a pick class, such as Sniper or Spy, in order to kill an important player on the other team, usually the Medic, and prompt the push. Some maps, like Product, the map design of which potentially encourages permanent use of a utility class, may see teams break from the standard lineup completely to take advantage of that.

In Highlander, due to the fact that one of each class is always present, there is no offclassing. However, the class strategies do vary from their public server variant, just like in 6v6. As such there are individual pages on the competitive strategies for each class.

In Prolander, due to it having 7 players per team but a class limit of 1, a large part of the strategy revolves around offclassing. However, some classes are almost always used, such as Demo, Medic, Solider and Scout due to their utility and mobility. The other classes are rotated depending on the situation and opposition's classes. For example a team might use an Engineer on Payload defence, and the attacking team might use a Spy to counter this.

The majority of competitive 6v6 play is done on 5CP maps, and in Highlander on Payload. The most common maps in 6v6 play are Badlands and Process. In Highlander, Upward is the most popular. In 6v6, the only non 5CP map actively played is Product, but Highlander has a larger spread of different gamemodes, from 5CP with Process and Gullywash (competitive) to Attack/Defense maps such as Steel, and King Of The Hill maps like Product and Lakeside.

Maps like Coalplant and Viaduct used to be featured more prominently in competitive, either being phased out of league play, like Coalplant, or updated by community members to a "Pro" version of the map, with Viaduct becoming Product. Between all of the leagues and gamemodes, many maps have been tested in official matches, with only a handful being popular enough to see any level of active play. Similarly, in the first few seasons of competitive, maps like 2Fort and Dustbowl received play, but have not been considered competitive maps for a long time, due to a number of skilled mapmakers in the competitive community willing to make maps specifically for competitive play.

Each of these leagues mainly run the standard competitive format, however some host Highlander, Prolander, 4v4, Ultiduo and BBall competitions.