From Team Fortress Wiki
Revision as of 12:10, 17 May 2020 by Echo123 (talk | contribs) (→‎Update history)
(diff) ← Older revision | Latest revision (diff) | Newer revision → (diff)
Jump to: navigation, search
This article is about the player's inventory. For other uses, see Backpack (disambiguation). 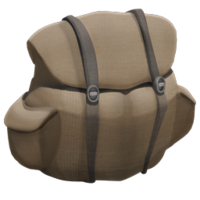 Before the backpack, there was a simple loadout screen for each class (introduced with the Gold Rush Update) which contained only weapon slots. Those classes who had updates released could use it to select between the vanilla and any achievement items that had been unlocked. The backpack (along with the class loadout screen proper) was introduced into the game some time between the Scout and Sniper vs. Spy Updates, with an initial storage capability of 50 items even though it could only store the 12 unlocked achievement items at that point (which could be comically deleted and never re-earned: April 20, 2009 Patch). The Sniper vs. Spy Update introduced the drop system which used this extra space. This was originally designed to supplant achievement weapon unlocking entirely, although achievement unlocks were reintroduced a week later due to public outcry. The storage size has since been increased on multiple occasions, and as of the Australian Christmas update in December 2010, the backpack now consists of 300 slots (or 6 pages). The Australian Christmas update also introduced the Backpack Expander tool, enabling the addition of 100 more slots per use to a total of 2000 backpack slots. The Jungle Inferno Update increased the maximum backpack slots from 2000 to 2500, followed by an expansion to 3000 total slots for Smissmas 2017. Free-to-Play Team Fortress 2 players will be limited to a single backpack page (50 slots); once they become Premium players with any in-game purchase or the use of an Upgrade to Premium Gift, their backpack is upgraded to the standard capacity.

Items, when moved within the backpack, will make a distinct sound based on the properties of the item itself; a distinct sound is usually heard when an item is picked and another when it is put down again. For example, the Eyelander, when moved, will produce the sound of a sword being drawn, and Bonk! Atomic Punch will make the sound of a pop top opening when it is picked up and the sound of a soft drink can falling to the ground when it is put down. Some items have unique sound effects, such as Ze Goggles, which make a sound that resembles the goggles turning on and off. Noise Makers will play their sound effects.